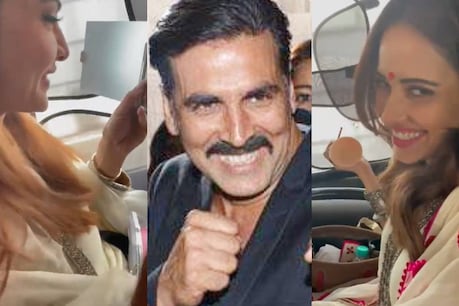 Akshay Kumar is busy these days with his most awaited film Ram Setu.

New Delhi. Bollywood players Akshay Kumar These days, he is busy with his most awaited film ‘Ram Setu’. Akshay Kumar has reached Ayodhya with his leading lady Jacqueline Fernandez and Nushrat Bharucha for the shooting of this film. Today, Akshay Kumar shared the first photo of Muhurat of his film and now he has also shared a video on his Twitter account a while back, which has become viral on social media after seeing it.

Sharing the view on my left and right…our version of India’s Got Talent What say? @Asli_Jacqueline @Nushrratt pic.twitter.com/i3G4CsJZvH

Let me tell you, along with the Muhurta of his film, Akshay is also going to meet CM Yogi Adityanath of Uttar Pradesh. Apart from this, Akshay will also meet Shri Ram Janmabhoomi Tirtha Kshetra Trust General Secretary Champat Rai and Trustee Anil Mishra. The film ‘Ram Sethu’ is being directed by Abhishek Sharma. This film is to be shot in Ayodhya, the birthplace of Lord Rama. The release date of this film is currently 2022 Diwali. According to Akshay, his film ‘Ram Setu’ is the link between the past, present and future generation.