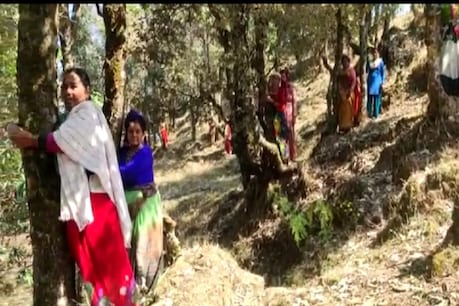 Uttarakhand News: Women wrapped in trees to save them from being cut. (News 18 Hindi)

Uttarakhand News: In Jakhani village of Bageshwar district, a large number of trees are being cut for motorway. In such a situation, the local people are going to cover the trees to save them.

Bageshwar. Chipko movement has started once again in Jakhani village of Bageshwar district of Uttarakhand. People are clinging to trees to save the trees that are being cut for the Kameedidevi-Rangadhara-Mazgaon-Chaunala motorway. The Chipko movement of 1973 has once again been remembered by women clinging to the trees. At that time it was run under the leadership of Gaura Devi.

Village head Ishwar Singh Mehta says that the village has a population of 600. There are more than 10 thousand trees of Banj, Burans and Utis in the forest spread over an area of ​​8 kilometers. In this, 90 percent are oak trees, which the villagers have brought towards their children. The survey that has been done for the road has been done completely through the forest route, which will eliminate most of the forest.

Himani Mehta says that the way our children grew up, in the same way, our families have also raised trees. But, in the name of making roads by the administration, trees are being cut, which we will not allow to be cut under any circumstances. First we will cut them, only then we will cut trees.

Another woman who became part of this campaign, Hema Devi, says that we have created a forest in view of water problem, which has been saved from fire. Even the people of the village do not cut trees to burn wood, so why allow thousands of trees to be cut in the name of the road? We are wrapped on trees, when the department cuts us, then we will let the saws run on the trees.What was the 1973 Chipko Movement?

The Chipko movement was a movement for environmental protection. The movement started in Chamoli district in 1973. It had spread across the state within a decade. This movement was led by Gaura Devi of Raini village. Those who clung to the trees to save the trees.