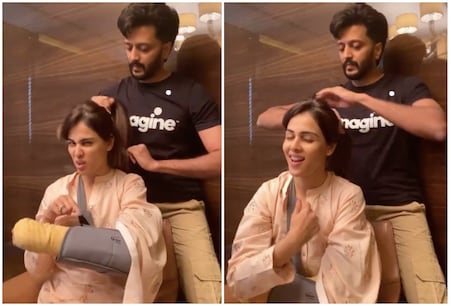 Actress Genelia D’Souza may not have achieved much in Hindi cinema, but Genelia has earned a big name in South Film Industry. He has worked with many superstars.

New Delhi. actress Genelia D’Souza Recently, she got injured while learning skating. Due to this, he has plaster in one hand. The actress also shared her videos on Instagram and in this difficult time, her husband actor Ritesh Deshmukh (Riteish Deshmukh Video) is taking full care of them. Genelia has shared a very cute video in which Ritesh is seen making his ponytail.

Genelia D’Souza has shared this with Ritesh Deshmukh on this Instagram account. Posting the video, Genelia D’Souza wrote that I need someone who can love me even in my difficult times. And that is you, Ritesh Deshmukh. Fans are not only liking this video of celebrity couple but it has got 7 lakh likes in a few hours.

Let us know that the actress Genelia D’Souza may not have achieved much in Hindi cinema, but in South Cinema, Genelia has earned a big name. She has worked with many superstars and has been a well-known name in the South Indian industry. Even after her marriage to actor Riteish Deshmukh, Genelia may be away from the film world, but she remains very active on social media. She often makes very cute and funny videos with her husband, which both she and Ritesh share on social media. Ritesh Deshmukh and Genelia D’Souza are counted in Bollywood’s cute couple. Today, their marriage has been eight years. This couple met for the first time on the set of the film ‘Tujhe Meri Kasam’. Their friendship and love started from there.