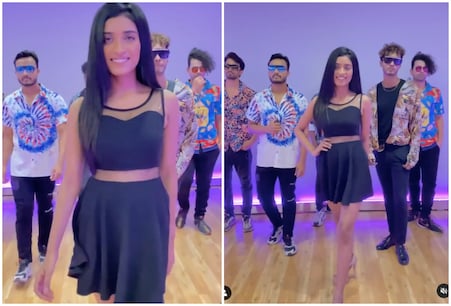 Manya has shared two dance videos on her Instagram account. In the video, Manya looks at the camera in a very glamorous style in a black color dress. Manya shared this video with her fans and wrote, ‘Our fight.’ Along with the fans, many celebrities have also commented and liked on this video. More than one lakh people have watched this video so far.

Recently, Manya Singh appeared in Sony TV’s singing reality show ‘Indian Idol Season 12’. Manya Singh reached the show with her mother-in-law Papa, where she shared the story of her struggle. Sony TV also shared a video of the episode featuring Manya Singh on its official Twitter account. This video was very much liked by the fans. Let me tell you that Manya Singh, daughter of Hata resident Omprakash Singh of Kushinagar district, won the first runner up title in the Miss India 2020 Beauty Peasant held in Mumbai. Originally, the family of Om Prakash Singh, a resident of Vikram Bishanpur in Deoria district, lived for a long time by building a house in Gandhinagar of Hata Nagar. Manya Singh’s journey has been very difficult. Her journey to reach Miss India’s stage was not so easy. Manya Singh’s father is an auto rickshaw driver. In December 2020, Manya Singh was elected Miss Uttar Pradesh. She was then elected run-up to Miss India in Mumbai.