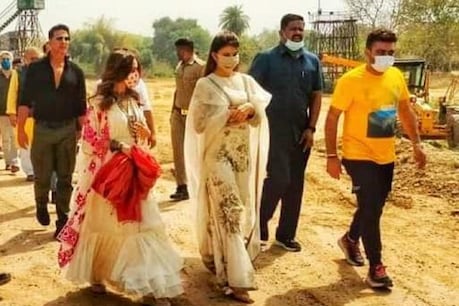 Actors Akshay Kumar, Jacqueline Fernandes and Nushrat Bharucha arrived in Ayodhya for the Muhurta of the film Ram Sethu.

Akshay Kumar’s security personnel did not allow him, Jacqueline Fernandez and Nushrat Bharucha to get off the car due to the huge crowd of fans. Due to the crowd, Akshay Kumar’s convoy left for Lucknow without seeing the location of Ram’s Paidi.

At the same time, the head priest of Ramlala, Acharya Satyendra Das told that the film Ram Setu is to be shot in Ayodhya. He also claimed that during the shooting of the film, the model of the Ram temple will also be shown in the film. He also claimed that Ram Sethu film will emerge as a religious movie which will be the center of attraction for everyone.

Ramlala darshan stops at 11:00 in the day. After this Ramlala goes to sleep and the temple then opens again at 2:00 pm for the general public. Akshay Kumar reached Ayodhya at around 12:30 pm and stayed with the Raj family for about one and a half hours. He saw the location for the shooting of the film. After this Akshay Kumar reached the Ram Janmabhoomi complex with his entire unit, where he performed the Muhurta of the film ‘Ram Sethu’ in front of Ramlala Virajaman. His entire unit with him was present in the Ram temple. Akshay Kumar Ram stayed in the birthplace for about 30 minutes.

Akshay Kumar went out of Ram’s birthplace and went to Ram’s foot. Here he had to perform the aarti of Saryu and see the location of Ram’s Paadi for the shooting of the film, but his fans thronged here. Due to this, security personnel posted under the security of Akshay Kumar did not let him, actress Jacqueline Fernandes and Nushrat Bharucha get off the car due to security reasons. Due to the pressure of the growing crowd of fans, Akshay Kumar’s convoy left for Lucknow without seeing the location of Ram’s Paidi. Akshay Kumar met Chief Minister Yogi Adityanath in Lucknow. This was his second meeting with the state Chief Minister Yogi Adityanath after the announcement of the creation of a film city in Uttar Pradesh. Raja Vimalndra Mohan Pratap Mishra of Ayodhya said that Akshay Kumar had a courtesy meeting. During this, General Secretary of Shri Ram Janma Bhoomi Trust Champat Rai and Dr. Anil Mishra were also present. Akshay Kumar stayed with us for 1 hour and had a normal conversation. He took information about the construction of Ram temple from Champat Rai and Sakha Triloki Nath Pandey of Ramlala. After leaving the Raj Sadan, he went to Ram Janmabhoomi, where he worshiped in front of Ramlala for the success of the film.

At the same time, Principal priest of Ramlala, Acharya Satyendra Das said that the worship of Lord has been done by placing a picture of God on the womb of Ramlala Virajman. In the meantime, he was accompanied by the trust’s officers and top officials of the district. A poster of the film Ram Setu was put in the court of Ramlala, in front of which the worship was done. Also, in the Ram Janmabhoomi complex, film actor Akshay Kumar and actresses were honored with Ramnami cover. The entire unit along with Akshay Kumar were blessed with the success of the film.