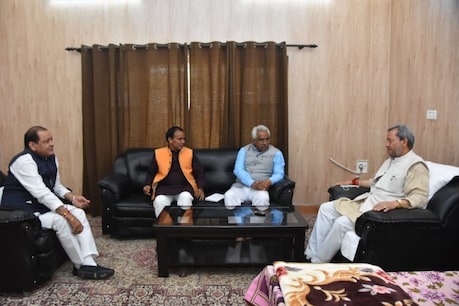 Political parties have also prepared for the Salt by-election.

Uttarakhand Salt Assembly By Poll: In the by-election of the Salt Assembly, it has been decided to vote from seven in the morning to five in the evening. According to the Chief Election Officer, this arrangement has been made in view of the time taken during the Corona Portocol.

Dehradun. Salt By Election is going to be the first election in Uttarakhand in the Corona era. Voters will get one hour extra time this time in the by-election of the Salt Assembly. That is, voting usually starts in the election from eight o’clock to five o’clock in the evening. But in the by-election of the Salt Assembly, voting will be held from seven to five in the evening. According to Chief Election Officer Saujanya, this has been done in view of the time taken to follow the COVID-19 Protocol. According to Saujanya, all his preparations of the Election Commission are complete.

The Chief Election Officer says that along with following the social distancing of voters, masks and hand sanitizers will also be used. According to Saujanya, during the Corona era, the Election Commission has the experience of conducting the elections for Bihar, so there will be no problem in conducting elections here as well. The training schedule of personnel engaged in election duty has also been fixed.

The Salt Assembly has a total of 95,240 voters, of which 48,682 are male and 46,559 are female voters. 136 polling stations have been built in the entire assembly out of which 16 sensitive and 7 Polling station Highly sensitive have been marked. According to the program announced by the Election Commission, there will be a nomination in the Salt from 23 March to 30 March. Scootney will be held on 31 March and candidates will be able to withdraw their name by 3 April. Counting will take place on May 2 followed by voting on April 17.Also read: Corona threat again on Bihar Day, all programs will be virtual on March 22, learn government guidelines

Political parties have also prepared for the Salt by-election. The BJP has formed a three-member panel of Cabinet Minister Yashpal Arya, Minister of State Dhan Singh Rawat and party’s State General Secretary Suresh Bhatt. This three member panel has been sent to Salt on Thursday, who will interact with the workers and officials in the Salt to make a list of potential candidates and will be sent to the Election Steering Committee of the party by Friday afternoon. BJP says that by March 20, the party will declare its candidate. Earlier on Thursday morning, Chief Minister Tirath Singh Rawat, State President Madan Kaushik also held a meeting with panel members for about an hour at Bijapur Chef House in Dehradun. On the other hand, the Congress has also sent an observer sult who will analyze the electoral conditions of the sult and send the entire report to the Congress high command.