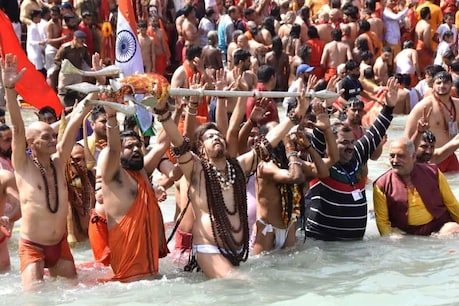 Now once again, there is a ruckus among the authorities regarding the arrangements of Kumbh.

Now it will be compulsory to bring negative report of Kovid not only for the devotees coming from other states, but also for the local people coming on the bathing festival. Now once again, there is a ruckus among the authorities regarding the arrangements of Kumbh.

Haridwar. The Uttarakhand government has taken a U-turn after the tough stand of the SOP and High Court of the Center in view of the threat of Corona infection hovering over the Mahakumbh. Till yesterday, the officials who are receiving yes on the announcement of the head of the government to end all the restrictions to come to the Mahakumbh, are now saying that the SOP should be strictly followed. Under this, now it will be compulsory to bring negative report of Kovid not only for the devotees coming from other states, but also for the local people coming on the bathing festival. Along with this, devotees coming from outside states will also have to register on the Kumbh website. Chief Secretary Omprakash says that cent percent of the center’s guide line will be followed. On the other hand, Chief Secretary Omprakash himself will go to Haridwar tomorrow and camp there with the officials for the next 3 days. During this, CS Kumbh will supervise the works. DMs of Haridwar, Tehri, Pauri and Dehradun will also be present during the inspection.

In fact, taking cognizance of a petition regarding Kovid rules in Kumbh and half incomplete preparations for construction works, the High Court set up a committee of five people, including District Magistrate Haridwar, District Judge Haridwar, Kumbh Mela Officer, Chief Permanent Advocate and Advocate for the petitioner. Was made This committee, in its inspection, found many flaws in the Kumbh Mela works, especially in Rishikesh, Muni ki Reti, etc. Hearing this, the High Court has instructed the Chief Secretary to take stock of the camp arrangements in the fair area and submit the report to the High Court.

However, now once again there is a ruckus in the authorities regarding the arrangements of Kumbh. Right now 3 big baths are to be held in Kumbh in April. Managing the crowd of millions in these baths, checking the Kovid Negative Report to each devotee will be a big challenge. What will happen to the lakhs of devotees coming from outside as well as local, who will reach Haridwar without a negative negative report. However, government spokesperson Subodh Uniyal says that there will be no shortage of man power in Kumbh. The facility of Kovid-19 test will be given to all the devotees coming to Haridwar.