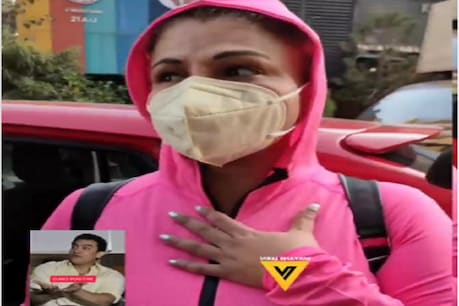 Rakhi Sawant has expressed surprise when Aamir Khan is infected with Corona virus.

Rakhi Sawant reacted to Aamir Khan’s corona saying, ‘O my God, really … I will get into a lot of trouble. It is very scary. Aamir ji i love you and i miss you. The video of his reaction is being seen on social media.

Mumbai. Bollywood’s Mr. Perfectionist Aamir Khan has become infected with Kovid-19. Aamir Khan has quarantined himself at home. On Wednesday, his spokesman had given information about this. As the talk of Aamir Khan being corona became public, his fans started offering prayers for his safety. Rakhi Sawant was a finalist on the reality show Bigg Boss 14, but has been in the news ever since she came out of the show.

Along with the fans, Bollywood actors are also wishing for Aamir’s recovery as soon as possible. Actress Rakhi Sawant has given her reaction when Aamir Khan is a corona. He expressed his surprise when Aamir was infected with Corona virus. He expressed surprise that, ‘O my God, really …’. Due to the reaction of Rakhi Sawant, social media users have trolled her.

Actually on Wednesday, Rakhi Sawant was spotted in Mumbai, then Pappaji and media persons surrounded her. After this, a reporter told him that Aamir Khan has become infected with Corona virus. Rakhi reacted to this and said, ‘O my God, really … I will get into a lot of trouble. It is very scary. Aamir ji i love you and i miss you. The video of his reaction is being seen on social media.

Viral Bhiyani has shared Rakhi Sawant’s video from her Instagram account. Some social media users have trolled him on Rakhi’s reaction. A user named madiha_anam_fatema has written, ‘This has become too much.’ pallu118 has written, ‘Nautanki Rakhi’. The user named rahoulkapoor has made a great comment. He has written- ‘He is alive and will be recovered, 50 rupees cut-over acting …’ Aamir Khan’s spokesperson had informed about his suffering from corona. In the last few days, many big actors like Ranbir Kapoor, Karthik Aryan, Satish Kaushik and Manoj Bajpayee have got corona. Aamir Khan’s spokesperson has said in a statement that he has quarantined himself at home after the report was positive. Also, he is following all the rules at this time.