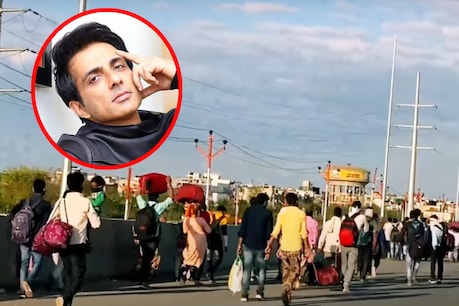 Sonu Sood said, ‘It was very difficult for me to see the migrant laborers, who were forced to face such difficult times. We should appreciate the will power of all of them.

New Delhi. Last year, when the lockdown was imposed across the country on March this year to protect against Corona, the migrant laborers, who suffered the most, were Bollywood actors Sonu Sood It was not seen from him and he openly helped the migrant laborers at that time. These were the same migrant laborers who, after the lockdown, had walked for miles on foot and bicycle from one state to another. Now journalist-turned-filmmaker Vinod Kapri has shown the pain of migrant laborers in one of his documentary films ‘1232 KMS’, which touched the hearts of Sonu Sood and celebrity chef Vikas Khanna.

At the same time, Sonu Sood and Vikas Khanna have expressed their reactions to Vinod Kapri’s documentary film ‘1232 KMS’. During a conversation with LatestLY, Sonu Sood said, ‘It was very difficult for me to see the migrant laborers, who were forced to face such difficult times. We must applaud the will power of all those who have faced those situations and worked to take those long journeys from door to door. Vinod Kapri has done an incredible job with ‘1232 KMS’. Disney + Hotstar VIP deserves praise for making such a real story unfold to the audience. ‘

Vinod Kapri came with a group of migrant laborers from Ghaziabad in Uttar Pradesh to Saharsa in Bihar during a lockdown last year, whose experiences he has portrayed as a documentary film. At the same time, Chef Vikas Khanna said, ‘Many people did not fully understand how difficult the lockdown was for migrant laborers – people whose livelihood depends on daily wages. As the country went into complete lockdown, they lost their jobs, which meant they had to think about food and shelter. He struggled a lot during this time. Vinod Kapri’s’ 1232 KMS ‘has touched his heart by showing his struggles.’ Let me tell you, this documentary film is streaming on Disney + Hotstar VIP from 24 March.