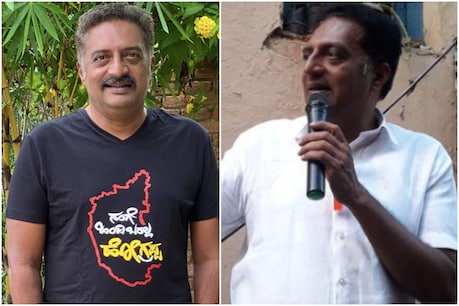 In Bollywood, Prakash Raj has been seen in films like ‘Singham’ and ‘Wanted’. Prakash Raj started his Bollywood career (Bollywood Debut) in the year 1998 with the film ‘Hitler’.

New Delhi. Actor of South films Prakash Raj (Prakash Raj) has his own identity in the bollywood industry on the basis of his talent. Today Prakash Raj is celebrating his 56th birthday. In bollywood Prakash Raj Has been seen in films like ‘Singham’ and ‘Wanted’. Prakash Raj started his Bollywood career in the year 1998 with the film ‘Hitler’.

Prakash Raj was born on 26 March 1965 in Bengaluru. Prakash Raj started his career with a TV show called ‘Bisilu Kudure’. He has also received the National Film Award for his performance in the film ‘Kanchivaram’. Prakash Raj was a theater artist before coming to films. Prakash Raj also used to play street play in the initial phase. He used to get 300 rupees a month to work in the theater. He started acting in Tamil films after Kannada cinema. In 1994, he made his debut in Tamil cinema with the film ‘Duet’. This film was a super hit and Prakash Raj also got recognition. Apart from acting in films, he has also directed. Please tell that he had named Prakash Raj from Prakash Rai for films. Prakash Raj had second marriage to choreographer Pony Verma in 2010. There is a difference of 12 years in the age of both. On 3 February 2016, the sixth year of marriage, Prakash became the father of son Vedanta at the age of 50. This is the fourth child of Prakash Raj. In fact, before Pony, Prakash married actress Lalita Kumari in 1994. In 2009, both of them divorced. Both have two daughters Meghna, Pooja and a son Sidhu, however, the son is no longer in this world. Let us know that Prakash Raj got recognition in Bollywood from the 2009 film ‘Wanted’. He acted in films like ‘Singham’, ‘Dabangg-2’, ‘Mumbai Mirror’, ‘Policegiri’, ‘Heropanti’, ‘Zanjeer’ and mostly appeared in Villain’s role.