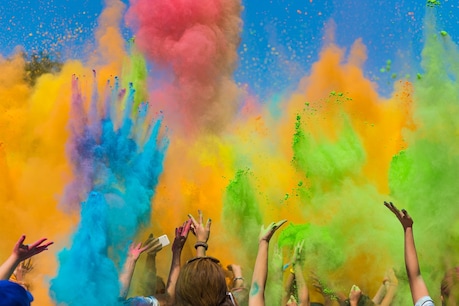 The government has released a new guideline on the occasion of Holi to ensure that the corona infection does not grow. (Symbolic picture)

The government has given various precautions to prevent infection of Kovid-19, as well as for Holi festival and other festivals, that many conditions have to be followed to celebrate them.

Dehradun. In view of the increasing cases of corona infection in the country, the state government has issued a guideline regarding Holi as a precautionary measure. On behalf of the government, Chief Secretary Om Prakash has issued guidelines regarding prevention of Kovid-19 infection and organizing other festivals. The government has given various precautions to prevent infection of Kovid-19, as well as for Holi festival and other festivals, that many conditions have to be followed to celebrate them.

Meanwhile, the Corona crisis has also increased in Uttarakhand and in view of the threat of Corona infection hovering over the Maha Kumbh, the Uttarakhand government has taken a U-turn after the tough stand of the SOP and High Court of the Center. Till yesterday, the officials who are receiving yes on the announcement of the head of the government to end all the restrictions to come to the Mahakumbh, are now saying that the SOP should be strictly followed. Under this, now it will be compulsory to bring negative report of Kovid not only for the devotees coming from other states, but also for the local people coming on the bathing festival. Along with this, devotees coming from outside states will also have to register on the Kumbh website. Chief Secretary Omprakash says that cent percent of the center’s guide line will be followed.

At the time of Holika Dahan, 50 percent of the total capacity of the venue is allowed to stay there. A directive has been issued not to gather unnecessary crowds at the Holika Dahan site.

The organizers of the ceremony will ensure arrangements for thermal scanning and sanitizer at the entrance. Also, entry will not be given to those suffering from fever, cold etc.

Holi will be celebrated with decency at Holi meeting places. There will not be any type of hooding. Alcohol drinks, fast music, loudspeakers, etc. will not be used at public places.

Proper arrangements for dustbin etc. will be made by the organizers at the venue. Dustbin should not be used to spread garbage etc.

From time to time, it will be mandatory to follow the guidelines issued by the Government of India, the State Government, and the District Administration at the venue.

In other festivals celebrated on different dates of the month, social distancing, sanitization and masks will be used to protect against kovid infection.