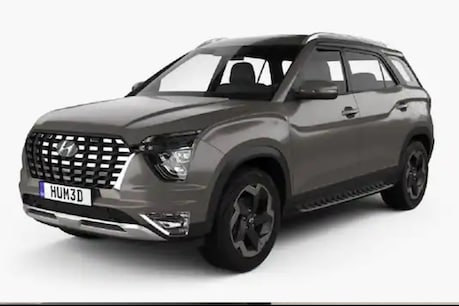 Hyundai Alcazar SUV will be launched on 6 April.

New Delhi. Hyundai recently released the teaser of its 7-seater Alcazar. The company is going to launch this SUV on 6 April. Before this, many photos of this SUV have been leaked. Seeing those, the Alcazar SUV can be estimated. Let’s know everything about this SUV.

Exterior of Hyundai Alcazar – Hum3D has been leaked on the website. Those who can be guessed by what the exterior of this SUV will be like. According to the leaked photos, the Hyundai Alcazar will be quite different from the existing Creta. In which the company has given a bumper and front grille. At the same time, in the Alcazar SUV, you have been given LED taillights, large rear overhangs. With this, it is believed that Hyundai can give 18-inch alloy wheels in this SUV. Which will be much larger than Creta.

ALSO READ: Video: This man from Patiala showed such feat on Royal Enfield that you will press the finger under the teeth

Hyundai Alcazar Interior Features – In this SUV, you will get a 10.25-inch touchscreen infotainment system. Which can be connected to Android Auto and Apple Car Play. Features such as voice recognition with BlueLink connectivity, 7.0-inch digital instrument cluster, panoramic sunroof, 6 airbags, vehicle stability management, Isofix mounted seat, hill start, anti-lock braking system (ABS), electronic brake force distribution (EBD).Hyundai Alcazar’s potential engine- Hyundai can offer a 1.5-liter natural aspirated petrol engine and a 1.5-liter diesel engine in this SUV. Along with this, you can also get a 1.4 liter turbo charged petrol engine in Alcazar. With these engines you can get the option of 6 speed manual, 7 speed dual clutch automatic gearbox.