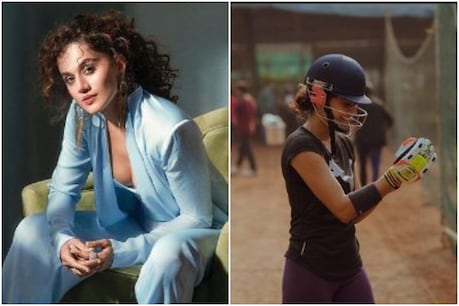 These days Taapsee Pannu is sweating heavily for his next film Shabaash Mithu. The actress has shared a picture while practicing on the net from the set of the film, which is becoming fiercely viral on social media.

New Delhi Taapsee Pannu has been busy shooting films for some time. She is shooting films one after the other. At this time, he is busy shooting for his next film ‘Shabaash Mithu’. The actress recently shared a picture from the set of this film, which is going viral on social media. The film is being made on the life of Mithali Raj, captain of the Indian women’s ODI cricket team, in which Tapsee has played the role of Mithali. Taapsee is sweating heavily on the cricket pitch to fit the role.

Taapsee has shared this photo with her Instagram account. In the photo you can see Taapsee standing on the pitch wearing globs and helmets. Taapsee Pannu wrote in the caption of this picture, ‘Happiness is there, mind is high, pitch is ready, #ShabasMithu.’ Taapsee Pannu has been practicing for a long time to mold herself into the role of Mithali Raj. Now his body language is also starting to look like a cricketer.

Taapsee is also learning the art of batting in the style of Mithali. During this time, she has often told her fans about her practice. Recently, Taapsee Pannu shared a picture of herself while taking a cover drive shot. The film ‘Shabash Mithu’ is being directed by Rahul Dholakia and it has been written by Priya Avan. In the film, actor Tahir Raj Bhasin will be seen in the lead role along with Taapsee Pannu. Taapsee has many films at this time. She will be seen in ‘Hasina Dilruba’, ‘Rashmi Rocket’ and ‘Loop Lapeta’. In the year 2020, Taapsee’s film ‘Thappad’ was released, for which he was highly praised. Talking about Taapsee Pannu’s film ‘Loop Laapeta’, while sharing a teaser of it, Taapsee had told that the film will be released in theaters on October 22.