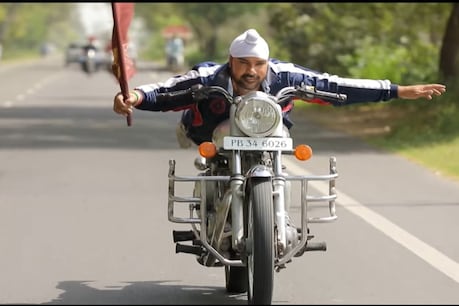 Ravindra has been performing stunts at Royal Enfield since the age of 23.

New Delhi. You must have seen many people performing stunts on bikes. But you have hardly seen anyone doing a stunt on a heavy bike like Royal Enfield. We are going to tell you about one such person who would show such feat at Royal Enfield as if the bike is running at his behest. Ravindra Singh of Patiala city of Punjab has been doing such stunts since childhood. The funniest thing is that till date, he has not taken any training for this. Let’s know everything about them.

Stunts done at a speed of 100kmph – According to Ravindra Singh, most people perform stunts at a top speed of 40 to 45. But whenever he does a stunt on his Royal Enfield bike, his top speed is 80 to 100 km / h. According to him, not everyone can do such stunts, a lot of practice has to be done for this. Only then you can balance on such a fast bike.

The Ladder Stunt is the most famous – Ravindra’s most liked stunt is The Ladder Stunt. In which he performs a stunt by fitting a 7-foot-high ladder into his Royal Enfield bike. According to Ravi, the weight of this ladder is around 25 to 30 kg and he shows this stunt at speeds of 80 to 100. According to Ravindra, the whole game in this stunt is of balance, if the balance goes wrong then any big accident can happen. Therefore he told that, he finishes only by practicing all his stunts. So you guys do not try these stunts.