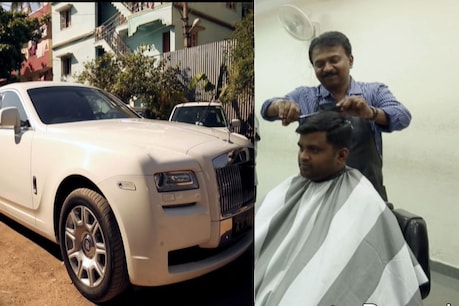 Ramesh bought the Maruti Omani Van in 1993 for his personal use. The one whom he bought by financing the bank and he did not even have the money to install it. After this, he did such a thing that, today he has 378 luxury cars.

New Delhi. You would be surprised to find 378 luxury cars owned by a saloon owner. But this is a very true story. In which Ramesh Babu, a resident of Bengaluru, has his own 378 luxury car. Which includes cars such as the upcoming Royal Rais, Audi, BMW and Jaguar of Crores. Despite owning so many luxury cars, Ramesh Babu still cuts hair and for this he only charges 150 rupees from his customers. Let’s know. How did Ramesh Babu from Bangalore buy so many luxury cars?

Purchased the first car in 1993- Ramesh bought a Maruti Omni van in 1993 for personal use in his life. According to him, he bought this car by financing it from the bank. They did not even have the money to pay for that installment. After this, he did such a thing that, today he has 378 luxury cars.

Changed luck with the advice of Nandini aunty According to Ramesh Babu, he started putting the first job of his career in the newspapers of the people. He told that his mother had worked with others and educated them. At the same time Ramesh Babu said – when he did not have the money to pay the installment of the first car. Then Nandini aunt gave an advice. In which he said, why not rent your car. After which Ramesh Babu started the business of renting a car out of the hair salon and today he has more than 378 luxury cars.ALSO READ: Video: This man from Patiala showed such feat on Royal Enfield that you will press the finger under the teeth

Want to buy this car soon too – Ramesh Babu wants to include a stretch limousine car in his fleet of cars soon. Let us tell you that the price of this car is about 8 crores. At the same time, you will be surprised to know that Ramesh Babu charges 50 thousand rupees a day for his Royal Royce car. According to him, he wants to keep the models of all the cars among themselves. So that no customer ever gets disappointed.