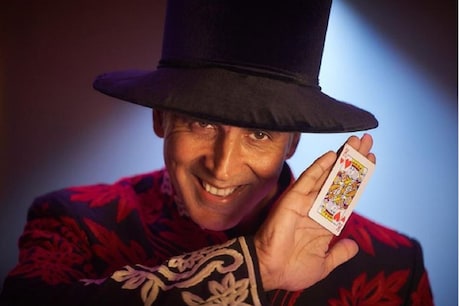 Akshay Kumar has shared an update on Instagram about his upcoming film ‘Atrangi Re’.

Akshay Kumar has shared a photo related to ‘Atrangi Re’ on Instagram. In this he is in the form of a magician. In the photo, Akshay is seen wearing a red color suit, which is embroidered with golden color. They are showing a card in their right hand.

Mumbai. Bollywood’s ‘player’ Akshay Kumar remains in the discussion. He is known for his tremendous fitness and doing many films in a year. On Saturday, he shared an update about his upcoming film ‘Atrangi Re’ with his fans. The film is very special in the sense that it has 3 such actors who are working with each other for the first time. Their names are Akshay Kumar, Sara Ali Khan and Dhanush.

Fans are excited to see these three together on the big screen. On Saturday, Akshay Kumar shared a great photo related to this film on Instagram. In this, he is seen as a magician. In the photo, Akshay is seen wearing a red color suit, which is embroidered with golden color. Also, he is wearing a hat and is showing a card in his right hand. A bright smile is also seen on his face.

With this, the fans have started speculating that they are not playing the role of magician anywhere in the film. Akshay Kumar has also written a short note with this image. He wrote with the image, ‘Today was the last day of shooting for Atrangi Ray and you experience the magic created by Anand L. Rai, I cannot wait for it. Also, he has thanked his co-stars, Sara Ali Khan and Dhanush for allowing him to be a part of this beautiful film. In the post, he also told that the music of Atrangi Ray has been given by AR Rahman.

Akshay Kumar brings about three to four films every year. His fans also eagerly wait for his film. At the same time, all his films are a big hit at the box office. Talking about the workfront, Akshay Kumar’s ‘Laxmi Bomb’ has been released on the OTT platform. Apart from this, he has completed the shooting of the film ‘Belbottom’. Also, he is going to be seen in films like ‘Suryavanshi’, ‘Bachchan Pandey’ and ‘Prithviraj’. In the film ‘Suryavanshi’, Akshay Kumar will be seen in the lead role alongside actress Katrina Kaif.