The 66th Filmfare Awards 2021 is being announced. The most successful film of 2020, ‘Tanhaji – Unsung Warrior’ has received the Best Action Award. At the same time, Kajol’s short film ‘Devi’ (Devi) has also won an award in his name.

In 2020, Ajay Devgan’s film ‘Tanhaji – The Unsung Warrior’ was truly the biggest box office hit of the box office. The film was released in January last year. Ajay Devgan played the role of a Maratha warrior, whose performance was highly appreciated. 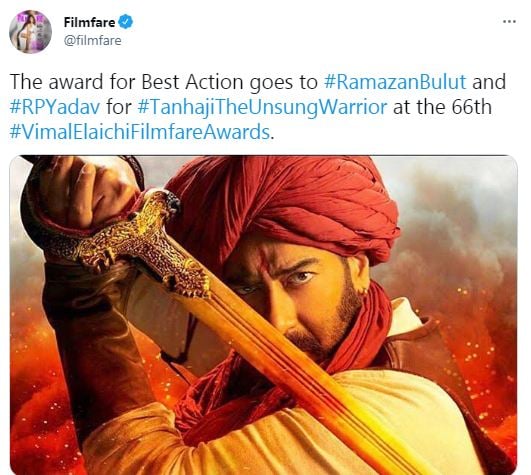 Apart from this, the award for The Black Lady for Best Film (Popular Choice) was in the name of the film ‘Devi’ (Devi). It is a 13-minute short film, which is a story of 9 women. In this, women come out from different situations and come to a place where no one is their own. The film is full of condolences. Priyanka Banerjee (Priyanka Banerjee) has directed the film with simplicity. Apart from Kajol, many Bollywood actresses have played their roles in this film. Neha Dhupia, Shruti Haasan, Shivani Raghuvanshi, Nina Kulkarni, Sandhya Mhatre, Rama Joshi, Mukta Barve, Rashvani Dayama have played a strong role in it.