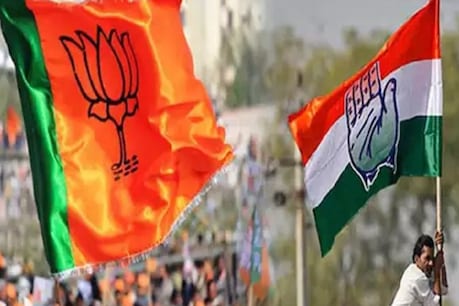 BJP has made preparations to make nomination famous for this. (Token picture)

With this, the importance of Salt By Election can be understood. The election to the Salt Assembly may be a by-election, but the BJP with an overwhelming majority of 56 MLAs does not want to take it lightly.

Dehradun. In Uttarakhand, these days the enthusiasts of Salt Assembly By-Election are fast. Now only three days are left in the nomination. However, both BJP and Congress national parties have not opened their cards yet. Both parties say that they can declare their candidates at any time. It is a different matter that the BJP (BJP) has started throwing all its strength. The BJP has stopped all its programs till the April 17 polling date in Salt. From the BJP’s Chintan meeting to the meeting of the State Working Committee has also been postponed. BJP says that it wants to remain focused only on the film.

With this, the importance of Salt by-election can be understood. The election to the Salt Assembly may be a by-election, but the BJP with an overwhelming majority of 56 MLAs does not want to take it lightly. After hours of brainstorming, party strategists have now given the command of Salt’s election to the six-member committee. Earlier, the party had formed a three-member committee of cabinet ministers Yashpal Arya, Dhan Singh Rawat, party general minister Suresh Bhatt for the Salt elections. Now three more names in this committee, including MP Ajay Bhatt, Ajay Tamta and former MLA Kailash Sharma have been included. BJP state president Madan Kaushik says that the party does not want to leave any lapse in the Salt by-election. We will win this with an overwhelming majority.

Nomination of party candidate
BJP has made preparations to make nomination famous for this. In a way, there will be the beginning of the election battle of the nomination salt from the BJP. On this day, along with all the ministers, MLAs adjoining the Salt Assembly, the party state president and officials are also reaching Salt. BJP state general secretary Kuldeep Kumar says that on March 30, he will nominate the party candidate in a grand manner.Salt’s political mercury will be at its peak
Here, Congress state president Pritam Singh has been camping in Delhi for the last three days. The BJP may not have been declared a candidate, but its stand is almost clear. There is a high probability that the BJP should give tickets to Mahesh Jeena, brother of the late MLA Surendra Singh Jeena, here. Mahesh Jeena Insidekhana has done all his preparations. But, there is still no opinion within the Congress as to who will be its candidate. The party previously wanted to make former MLA Ranjit Rawat a candidate from Salt, but state president of the party Pritam Singh says that Ranjit Rawat has categorically refused to contest the election. However, now the Congress has two options within the party. Either he contested Ranjit Rawat’s son from Salt or gave ticket to Ganga Pancholi, who was runner up in 2017. But, it is certain that the final date of nomination is on 30th March. Congress will also file nomination papers of its candidates on the same day. That is, March 30 will be the day when the political mercury of the Salt will be at its peak.