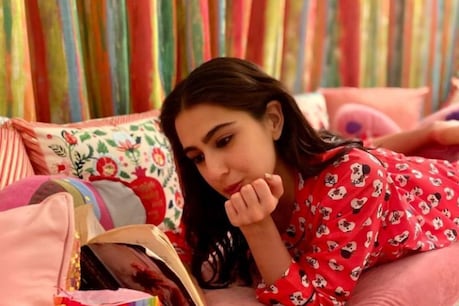 Mumbai Bollywood actress Sara Ali Khan remains very active on social media. Through her pictures and videos, she is often attached to her fans. She is seen sharing interesting posts on the day to stay connected with her fans, who also get a lot of love from their fans. Recently, Sara Ali Khan is in discussion for some similar reasons. Sara Ali Khan Photo has shared a photo of her on Instagram, in which she is getting a new avatar.

Sara Ali Khan is seen lying on the couch in a night suit and reading a book. With whom she has also told that she had no work, so she sat down to study. Sara has written in the caption- ‘Today there was no work, so I am going to study.’ Sara’s loveliness fans are very much liked in the photo. Many users have praised this photo of Sara while commenting. Everyone is loving the cute style of the actress in the nightsuit. Sara started her film career with ‘Kedarnath’. Sara received a lot of accolades from all sides for this film. Sara was praised by fans and critics for her acting. After which Sara got the line of films. There is no dearth of Sara’s fans on social media. He has more than 31 million followers on Instagram.