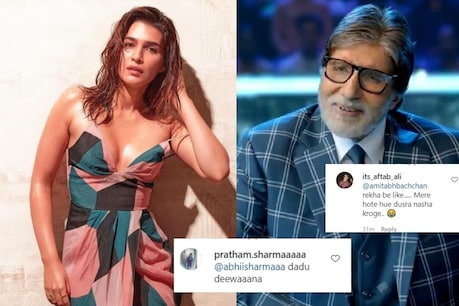 Big B’s comment on Kriti Sanon’s photo has been overshadowed on social media. Some users did not back down from making funny comments about Big B’s comment. Commenting on the pictures of Kriti Sanon, Amitabh Bachchan wrote – ‘Wow’.

Mumbai Bollywood actress Kriti Sanon recently shared some of her bold and glamorous pictures on social media. After seeing whom, what fans and what celebs, no one could stop themselves from praising the beauty of the work. Amitabh Bachchan also commented on these glamorous pictures of Kriti Sanon. Which is now being discussed everywhere. Big B’s comment has been overshadowed on social media. Some users did not back down from making funny comments about Big B’s comment.

Commenting on the pictures of Kriti Sanon, Amitabh Bachchan wrote – ‘Wow’. Seeing this comment from them, the users started commenting in various ways. A user reacting to the comment of Big B wrote – ‘Didi tera dadu deewana’. At the same time another user said – ‘There is respect for you in the feelings of Didi Dadu. Wow … ‘one user wrote -‘ Bachchan sahab mauj, Jaya and Rekha in search of Kriti Sanon. ‘ At the same time, some users started to teach a lesson to those who troll them on the comment of Big B.

Commenting on the comment of Big B and the wrong reactions coming on it, a user wrote – ‘I do not understand what is bad in this comment. It is not wrong to praise someone’s beauty. Another said- ‘There is nothing wrong in this, just do it.’ At the same time, seeing the reaction coming on the comments of Big B, celebrity photographer Viral Bhayani wrote – ‘Wow has become wow’. Big B’s comment is being discussed the most on Kriti Sanon’s photo. This comment of Big B is becoming increasingly viral. Kriti Sanon shared two of her pictures on Instagram. In which she is seen spreading her style in a deep neck maxi dress.