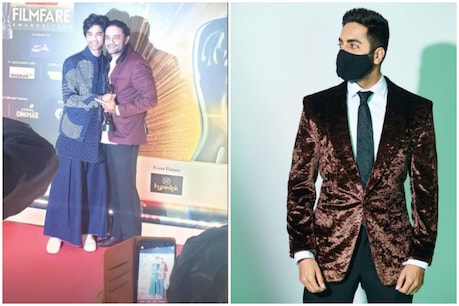 This time in Filmfare, actor Irrfan Khan was awarded the Lifetime Achievement and Best Actor Award for his last film ‘English Medium’. Irfan’s son Babil came to receive this award.

new Delhi. Actor Ayushmann Khurrana Apart from his acting, there is a lot of fame among the fans for writing as well. On the occasion of the Filmfare Award, the actor met Babil, son of the late Irrfan Khan. This time in Filmfare, actor Irrfan Khan was awarded the Lifetime Achievement and Best Actor Award for his last film ‘English Medium’. Irfan’s son Babil came to receive this award.

Ayushmann Khurrana wrote a lovely poem for late actor Irrfan Khan on this occasion. Ayushman Khurana also appeared to be emotional on this special occasion. Ayushmann Khurrana has shared a special picture of Irrfan Khan on his Instagram account. Sharing this photo, Ayushmann wrote, ‘He is somewhere in Bandra but he is somewhere in peace, celebrating his double victory. Best Actor (Male) and Life Time Achievement Award! I got the opportunity to give the Filmfare Award to Babil. I met this beautiful boy for the first time. I can see that he will do very well in the future. Ayushman he further wrote- ‘We artists are a special species. We have weaknesses, fantasies and theories. We depend on observations and experiences. We live and die many times on screen and on stage, but the power of those performances makes us immortal ‘. For Irrfan Khan, the poem’s line Ayushman has written something like -‘ The actors never have a past, never a present ‘ . Whenever an artist goes, he is not respected in this way, because not everyone is a Irfan.

Actor Irrfan Khan, who has taken a stand from this world in the year 2020, still rules the hearts of the fans. Irfan Khan was 53 years old and was fighting a battle against cancer for a long time. Irrfan Khan’s health had suddenly worsened, due to which he was admitted to Kokilaben Hospital in Mumbai. After fighting for several hours, the news of his death came on Wednesday, 29 April. He was worried about his health for a long time but he was a fighter. Expressing his desire to win the battle with cancer, he said in an interview that he wants to be alive for his wife.

At the same time, Ayushmann, who made his Bollywood debut with the 2012 film ‘Vicky Donor’, has given many hits in the last few years. At the moment he has many films, including ‘Many’, ‘Chandigarh Kare Aashiqui’ and ‘Doctor Ji’. Ayushmann was last seen in Shoojit Sircar’s film ‘Gulabo Sitabo’ with Amitabh Bachchan.