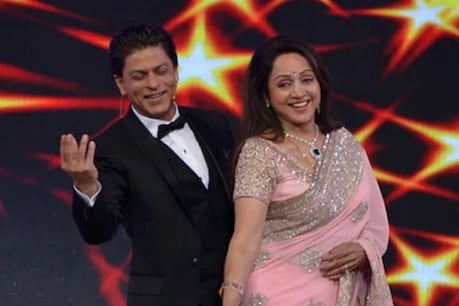 Shahrukh Khan recalled the incident in front of Hema Malini at an award function when he got a call for a film offer.

Mumbai. Shahrukh Khan started his career with TV serials ‘Fauji’ and ‘Circus’. After moving from television to Bollywood, he did not look back. One thing that few people would know about King Khan, who gave hit films to Bollywood one after the other, is ‘Basanti’ of ‘Sholay’ i.e. Hema Malini (Hema Malini) who gave him a chance to appear in TV, Bollywood. After seeing ‘Fauji’ and ‘Circus’ serials, Bollywood’s Dream Girl called Shahrukh one day and offered him for the film, but the actor could not believe this.

Shahrukh Khan recalled the incident in front of Hema Malini at an award function when he got a call for a film offer. The actor told that he was in Delhi those days. Hema Malini’s cousin got a call and said that she wants to talk to you. He was not sure about this, but talked. Hema praised her face and said that I want to cast you in my film. The actor had told that on hearing this he felt that a girl from Delhi is trying to beat him by becoming Hema Malini. After some time work on the film progressed and he reached Hema’s house to meet him, where he met Dhamendra. Hema introduced Shahrukh to Dharmendra and said, ‘This is the hero of my new film’ and he said, ‘Yes, yes, why not so good, take it’. After that, he was convinced that yes all this is true. Remembering this entire sentence, Shah Rukh Khan fell at the feet of Hema Malini and said that if you ask for life, I can give it.