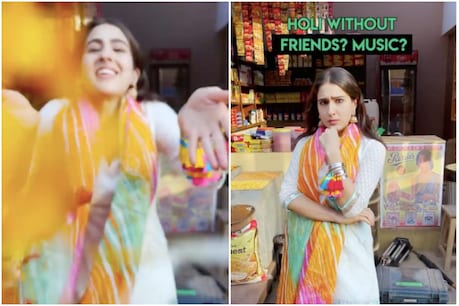 Due to the high impact of Corona in Maharashtra, Holi (Holi 2021) events have been canceled in most areas. Meanwhile, celebrities in Mumbai are also celebrating Holi in their own style.

Mumbai. Holi festival is being celebrated all over the country today, but due to Corona, some guidelines have been made in every city and state this year too. Due to the high impact of corona in Maharashtra, in most areas Holi (Holi 2021) ‘S events have been canceled. Meanwhile, celebrities in Mumbai are also celebrating Holi in their own style. Actress Sara Ali Khan has also shared her Holi video with fans.

Sara has shared a video from her Instagram handle. In this video, Sara is looking very beautiful in the colors of Holi. While sharing the video, Sara wrote that a very happy Holi to all of you. This is my first dance video with Spoity India and I invite all of you to follow this trend. Sara further wrote that follow this trend and you also share your video with your friends. This video of Sara is now very much liked by her fans.

Apart from Sara, Holi photos and video instagram of many celebs are becoming viral. Actress Priyanka Chopra, who played the sting of her strong acting from Bollywood to Hollywood, also loves Holi festival. Proof of this is Holi played with Priyanka’s husband Nick Jonas and in-laws. At the same time, a Holi video of Sushant Singh Rajput and Jacqueline Fernandez is going viral. In the video, Sushant Singh Rajput can be seen doing a brilliant dance and blowing colors on the ‘Rang Barse’ song. This video of both of them is becoming increasingly viral on social media. Let me tell you that this throwback video of Sushant and Jacqueline is from Mumbai’s Holi Party.