The director of the film ‘Master’ (Lokesh Kanagaraj) is infected with Corona. He is currently undergoing treatment in a private hospital. The director himself gave the news of his corona positive (COVID-19 Positive) to his fans.

New Delhi Lokesh Kanagaraj, the director of the film ‘Master’ (Master), starring actors Vijay and Vijay Sethupathi, revealed on Monday that his test report of Kovid-19 (COVID-19) has come positive. . He is infected with Corona. He told that he is currently undergoing treatment in a private hospital.

The director wrote a note on his Twitter account, ‘Hello everyone. I am writing this to tell all my friends, family and well-wishers that the test report of my Kovid-19 has come positive. I am admitted in a private hospital, where I am being well taken care of. I will come back soon and with strength. 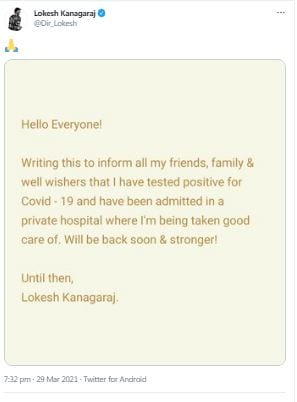 The film ‘Master’ was released on 13 January 2021 after a long wait. Within 20 days, the film was also streamed on the OTT platform Amazon Prime Video. Directed by Lokesh Kanagaraj, the film earned Rs 100 crore in the first week of its release. In the first five days, ‘Master’ had earned a net of Rs 101 crore. Then in the next few days, the film collected 125 crores at the domestic box office. The film has also overtaken Vijay’s collection of ‘Theri’ released in 2016. Lokesh Kanagaraj will soon begin work on his next Tamil film with Kamal Haasan. The teaser fans of this film named ‘Vikram’ have liked it a lot.