Virat Kohli has returned to his home in Mumbai after the end of the ODI series against England. Meanwhile, Virat shared a picture on his Instagram account, in which he is seen sitting on the chair in the balcony of his apartment and the sea is seen in front.

Mumbai. Royal Challengers Bangalore (RCB) captain Virat Kohli (Virat Kohli) has returned to his home Mumbai after the end of ODI series against England. He will join the team in Chennai after resting for a few days. Where RCB will face Mumbai Indians on 9 April in the opening match of the IPL. Meanwhile, Virat shared a picture on his Instagram account, in which he is seen sitting on the chair in the balcony of his apartment and the sea is seen in front. He wrote with this picture that there is nothing like home.

Seeing the picture of Virat Kohli, the fans are guessing that this photo was taken by Anushka Sharma. However, nothing like this has been written in Insta Story. Please tell that Kohli was in bio-bubble since late January this year. In the last two months, he took part in 4 Tests, five T20s and three ODIs against England and now he will captain the RCB in the IPL. Kohli left the team’s bio-bubble after the end of the ODI series against England on Sunday. Now after reaching Chennai, they will have to be quarantined in a hotel room for seven days under the Corona Protocol decided by the BCCI. 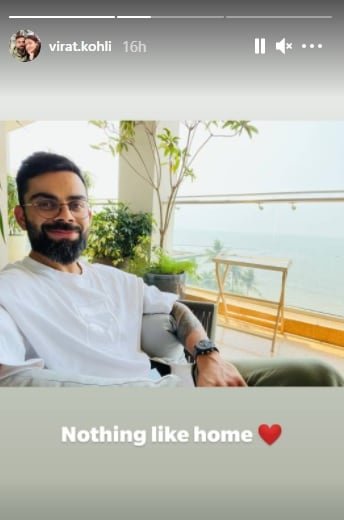 Virat Kohli also shared a picture of himself from the apartment. (virat kohli / instagram)

Earlier, the picture of Virat Kohli as well as Anushka Sharma and Vamika from Ahmedabad Airport was becoming viral on social media. Virat and Anushka have not yet brought up their daughter. In such a situation, the fans are even more eager to see Vamika. In viral photos on social media, you saw that Anushka is raised in the lap by Vamika. At the same time, Virat Kohli has taken the goods. Let us know that the Board of Control for Cricket in India has allowed all the players to keep their families with them during the entire series. Anushka Sharma joined Virat Kohli in Ahmedabad during the Test series.