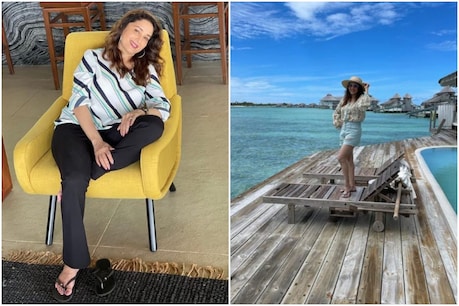 Madhuri Dixit has arrived in Maldives these days for a holiday. (Instagram @MadhuriDixit)

After TV celebs and Bollywood actors, now Madhuri Dixit has also reached out to enjoy the beach.

new Delhi. Bollywood celebs are arriving in Maldives for a summer holiday in the midst of the Corona wave in Maharashtra. After many TV celebs and Bollywood actors, now Dhak Dhak Girl Madhuri Dixit She has also reached the beach to enjoy. Madhuri has also shared her holiday photo with her fans. Madhuri Dixit has also joined the long list of celebrities who have been choosing Maldives as their holiday destination since last year.

Madhuri Dixit has shared her photo on Instagram, in which she is looking very beautiful in blue shorts on the sea shore. Madhuri completed her look with a hat and printed shirt. Madhuri, sharing her post, wrote that hello from heaven. Madhuri has also shared her holiday photo with her fans. (Instagram @MadhuriDixit)

Let me tell you that Madhuri Dixit is playing the role of a judge in a dance show these days and is seen constantly stealing the hearts of the fans with her desi look. Apart from Madhuri Dixit, the show is judged by Dharmesh and Tusshar Kalia, while Raghav Juel hosts the show. But none of these are reported to be corona, which is a relief for the show and the channel. When the corona test of all cast and crew members was taken before the shoot of the show on this weekend, the corona report of 18 crew members associated with the show turned out to be positive. All 18 crew members are currently home quarantine. On the set of dance based reality show ‘Dance Deewane’ on Callers Channel, a rule has been made that every member of the shooting is subjected to a corona test before shooting. If symptoms of corona are found in any member, then they are not allowed to take part in the shooting.