The first song ‘Chali Chali Song Out’ of the film ‘Thalaivi’ was released. The special thing is that this song was released by South Superstar Actress Samantha Akkaini on her social media in three languages ​​i.e. Hindi, Tamil and Telugu.

Mumbai. The wait is finally over. The song to see Kangana Ranaut Fans and fans of the late Jayalalithaa were seated, the moment was over and the first song from the film ‘Thalaivi’ ‘Chali Chali’ (Chali Chali Song Out) Has been released. The special thing is that this song was released by South Superstar Actress Samantha Akkaini in three languages ​​i.e. Hindi, Tamil and Telugu on her social media and expressed her happiness saying, ‘Amma’s unmatched grace and her stunning presence on screen Everyone knows Witness for his unique journey from cinema to CM. #chalichali #MazhaiMazhai #IlaaIlaa. ‘

The song has been depicted beautifully, where Jayalalithaa’s innocence and elegance of the Golden Age have been attempted to be captured in the camera through Kangana. Kangana’s fun played with water and Jayalalithaa’s classical world have been shot in the shape of a studio. Where every view of Amma is telling the story of Jayalalithaa’s early phase. 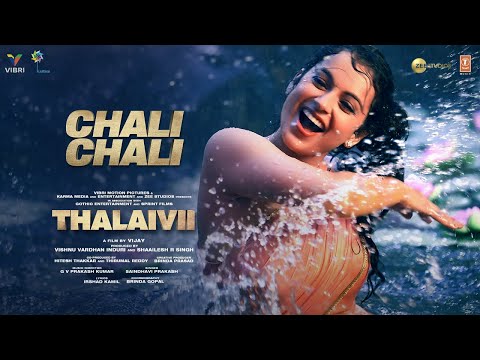 The music of the film is given by GV Prakash Kumar and the melodious voice is by Sandhavi. The lyrics of the song have been written by Irshad Kamil. This song will remind the late Jayalalithaa of her first film ‘Venira Adhai’ in 1965. The film ‘Thalaivi’ is based on the life story of Jayalalithaa, a legend actress and then politician. The film will be released world wide on 23 April 2021 by Zee Studios in Tamil, Telugu and Hindi languages.