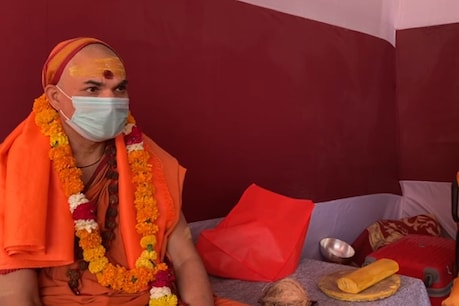 Swami Avimukteshwaranand, a disciple of Shankaracharya Swaroopanand Saraswati, has expressed his displeasure over the guidelines regarding the Kumbh.

Haridwar. The Mahakumbh (Haridwar Mahakumbh 2021), which started in Haridwar, Uttarakhand, started from April 1, but the effect of the corona epidemic can be seen clearly here. The Uttarakhand government has also issued a Kovid guideline in view of Corona, due to which the saints are looking angry. Especially before Shankaracharya Jagadguru Swami Swaroopananda Saraswati’s entry into the Mahakumbh region, his successor Swami Avimukteshwarananda (open Swami Avimukteshwarananda) has expressed his open displeasure on the official guidelines of Corona.

Swami Avimukteshwaranand, while talking to News 18, has raised questions on the Standard Operating Procedure (SOP) issued for Corona. He said that “When there can be electoral meetings without restraint and corona report, then why not Kumbh to be held in twelve years?” Swami Avimukteshwaranand bluntly said why the government is making coercive rules to bring the Covid test report. Due to which the devotees are unnecessarily upset and they are being stopped at the border. Mahakumbh’s message is not going well among the devotees due to the problems being faced at the border.

Swami Avimukteshwaranand raised the question that during the election rallies in Bihar, Bengal, Assam and Kerala elections, a crowd of millions is gathering. How many people in this crowd have corona test report? How can it be that coronavirus is spreading only due to the arrival of people in Mahakumbh. Swami Avimukteshwaranand said that the government should keep a guideline for the entire country.