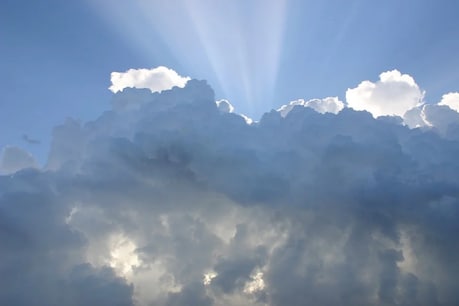 Giving information about the cloud, scientists said that it was the year 2018 that created a storm in the Pacific Ocean. These clouds were 30 degrees colder than normal storm clouds.

London. You all must have heard that in cold weather the mercury went to Minus Degree. Cold begins to be felt in the name of minus degrees. Scientists have discovered a cloud whose temperature has been found to be minus 111 degrees Celsius. Scientists are calling this cloud the coldest cloud ever. Giving information about this cloud, scientists said that it was only in 2018 that it created a storm in the Pacific Ocean.

Scientists at the UK National Center for Earth Observation were studying the clouds of storms around the world. During their study, scientists found that in 2018, the temperature of the hurricane cloud on the Pacific Ocean was minus 111 degrees Celsius. The temperature of the cloud is still a record. Scientists had never seen such a cold cloud before. According to the scientists of the Center for Earth Observation, this storm cloud was located at an altitude of 18 km from the ground. Because tropical cyclones, circular low-pressure storms can go to great heights. Where the air temperature is very low.

When scientists tried to get more information related to this cloud, the data that came out were surprising. These clouds were 30 degrees colder than normal storm clouds. According to the research of the scientists, the cloud was present on December 29, 2018, near the place called Nauru, located on the south side in the Pacific Ocean.Also read: – Will you win over HIV? Indian scientists achieved great success

It was spread in great size. Scientists have estimated that the diameter of this cloud was about 400 kilometers. The help of NASA satellite NOAA-20 was taken to calculate the temperature of this cloud.