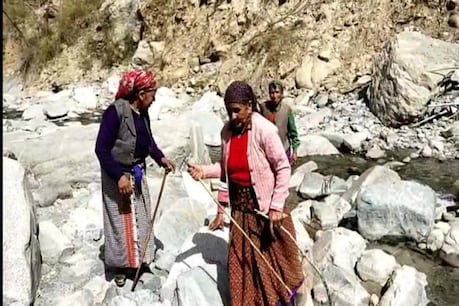 Uttarakhand: Elderly getting corona vaccine after walking several kilometers on the mountain

In Uttarakhand, elderly people are traveling several kilometers on the slippery and dangerous paths of the mountains and taking vaccine doses. These pictures speak of the compulsion to fight Corona. After getting the Corona vaccine installed, he is also forced to return on foot from these inaccessible areas.

Dehradun. Shocking pictures of Corona Vaccination are coming out from the rural areas of Uttarakhand. Elderly people here are walking several kilometers to take vaccine doses on the slippery and dangerous paths of the mountains. These pictures speak of the compulsion to fight Corona. People here have to go through many inaccessible areas to get the Corona vaccine installed. People are walking for eight to eight kilometers i.e. about 16 km for the vaccinations and the administrative arrangements are proving to be unsuccessful.

Crossing the bumpy roads, river drains, taking risks with each other, many elderly people are being seen walking. These pictures are of Sir Badiyar area of ​​Purola tehsil of Frontier Uttarkashi. There are eight villages in Sarabdiar area. This entire area is far away from development. There is neither a road nor a paved road here. There is also a shortage of bridges on buried donkeys. Kailash, the youth of the village, says that if sick, people have to sit on their shoulders or in a dolly and bring them to the road. Many times a sick person dies on the way.

These days the Corona vaccine is being installed. The Chief Minister’s order is that vaccines should be applied to the elderly first to the remotest villages. People are going towards health centers to get vaccinated for this. Burjag is going to install the vaccine in Sarnaul of Naogaon block after walking eight kilometers. They have to come back to the village through these bumpy roads. At least eight to nine hours must have gone into it. It is a different matter that in the government files, there has been shown to be vaccination in Sarbdiar, a sub-center built in his village.

CM Joshi of Uttarkashi district, DP Joshi, cited the guide line of the Government of India. According to the CMO, it has been written in the guide line that there should be an ambulance in the vicinity of half a kilometer around the vaccination center, so that the hospital can be sent immediately in the event of a reaction. Since there is no road in Sarabdiyar, it is not possible to get vaccinated there. On the other hand, in general, look at the vaccinations after half an hour of observation, then the person is staying normal. But later, he is complaining of fever. This fever is also going up to 102, 105 degrees. In such a situation how an elderly man will travel on the bumpy, rocky paths of the mountain. However, CMO DP Joshi says that the government has been conveyed in this regard. If there is some change in the guide line, then there will be vaccination by going from village to village.

Hundreds of mountain villages are miles away from the road. If we take the example of Sarabdiar valley of Uttarkashi, then how will there be vaccination in these far-flung areas. It is clear that neither Burjag Miles will be able to walk on foot nor the Health Department will be able to reach the village on foot. Then there will be vaccination.