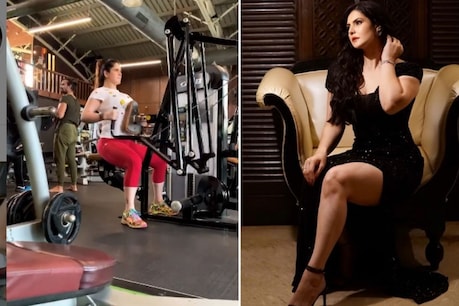 Mumbai. Bollywood actress Zareen Khan never wanted to enter the film world, but says that no one ever gets stressed in front of luck. Something similar happened with Zarine. Zarine wanted to study and become a doctor and serve the people. But she has come into the acting world.

The entire credit for bringing Zarine into the film world goes to Dabangg Khan i.e. Salman Khan. He gave Zarine a chance in the film industry with his film ‘Veer’. The film did not do anything special, but Zarine was highly liked. Zarine got the most popularity in Salman’s film ‘Reddy’ from the item song ‘Character Loose Hai’. Zarine may not even become a doctor, but continues to teach fitness lessons to her fans on social media.

Zarine Khan has shared a video while doing gym on Instagram account. In the video, Zarine is seen sweating profusely in the red color capri and white color T-shirt. Apart from exercising, the fans are also explaining the importance of fitness. Sharing this video, Zarine has challenged in the caption while challenging his fans. He has written, ‘Now my’ Do not rush ‘version, what is yours? On this video of Zarine, fans are praising him as beautiful and gorgeous. Thousands of views have come on this video shared only a few hours ago.

Talking about the workfront, Zarine Khan will soon appear in a music video with Prince Narula. Along with Bollywood, the actress is also making a mark in the Punjabi industry. She has also worked in Sajid Nadiadwala’s superhit multistarrer films ‘Housefull 2’ and ‘Hate Story 3’.