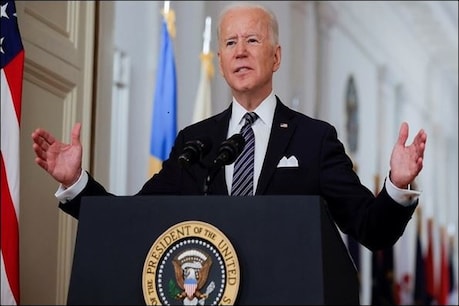 US President Joe Biden said the United States did not agree with Iran’s demand for the first ban to be lifted. (ANI)

Iran’s nuclear program: US President Joe Biden has said that his administration’s priority is to rejoin the Iranian agreement, but the US does not agree with Iran’s demand to lift the first ban.

Vienna. The five world powers and Iran, who were involved in the agreement reached in 2015 regarding the Iranian nuclear program, met in Vienna on Tuesday. During this time indirect negotiations between the US (Ameirca) and Iran are likely to start. With this, efforts to return to the US agreement have intensified. The US and Iran said on Friday that they would initiate indirect negotiations through intermediaries so that the two countries could return to the agreement on limiting the Iranian nuclear program. About three years ago, the then President Donald Trump separated America from the nuclear deal with Iran.

Trump had separated the US from the Iran nuclear deal in 2018. US President Joe Biden has said that his administration’s priority is to rejoin the Iranian agreement, but the US does not agree with Iran’s demand for the first ban to be lifted. Senior officials of the foreign ministries of the countries involved in the agreement are meeting in Vienna on Tuesday under the chairmanship of the European Union. In addition, the US delegation led by Rob Male, the special envoy of the US administration for Iran, is also coming here.

Foreign Ministry spokesman Ned Price said the resumption of the talks was “a good step forward.” He said, “This is the beginning and we do not immediately anticipate any success as there will be complex discussions ahead.” Price said that the talks would be centered around the working groups that the European Union would form with Iran and other countries involved in the agreement. Iran’s Foreign Minister Mohammad Jawad Zarif tweeted on Friday, ‘No meeting between Iran and America. Unnecessary.’