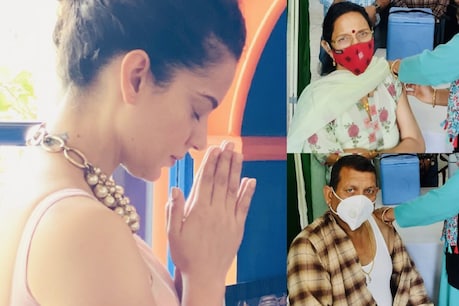 Kangana Ranaut on Wednesday administered a second dose of vaccine to her parents in her home state of Himachal Pradesh for the prevention of Kovid-19.

new Delhi. Famous bollywood actress Kangana Ranaut On Wednesday, in his home state of Himachal Pradesh, he gave his parents a second dose of vaccine for prevention of Kovid-19, which he shared some pictures with his Twitter account. While tweeting, Kangana said that now she is waiting for her turn to get the vaccine.

Sharing photos of her mother and father getting vaccinated, Kangana tweeted, ‘My parents got the second dose of vaccine in Himachal Pradesh today, they have no fever, any weakness or other symptoms. They are feeling good… Now I am waiting for my turn. ‘ Now these pictures shared by Kangana on social media are going viral. Let me tell you, Kangana is very busy these days with her most awaited film ‘Thalaivi’. In the film ‘Thalaivi’, Kangana, former Tamil Nadu Chief Minister, late J.K. Playing the role of Jayalalithaa. The film is scheduled to be released in Hindi, Tamil and Telugu on 23 April. The trailer of this film was released a few days ago, which people liked very much and also praised Kangana’s acting. Apart from this, Kangana is also shooting for her second upcoming film ‘Tejas’, which is being directed by Sarvesh Mewada.