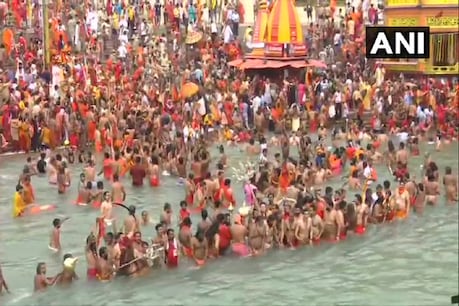 A crowd of saints and saints gathered in Haridwar to bathe in the second royal Kumbh.

By 4 pm today, more than 28 lakh saints and saints took a dip of faith in Haridwar Mahakumbh. Now for the common devotees, Hari Ki Paadi Ghat has been opened for Kumbh to take bath.

Haridwar. A second royal bath was concluded today on the day of Somvati Amavasya at Har Ki Paidi. In the second royal snan, saints and saints took a bath in the Ganges. However, during this time, there was a little haze in the security arrangements from the administration. The second royal bath was completed today amidst a few shortcomings. Now what preparations for the third royal bath to be held on 14th, Deepak Rawat of News 18 spoke to the Mela officer.

Kumbh official told that they are getting the support of the sages during the royal bath. He said that we have provided the kind of facilities that saints and saints wanted. The state government is following the Kovid-19 protocol issued by the Government of India in Kumbh with full intent. The Chief Minister of the state thanked the media for the Kumbh coverage.

Uttarakhand: New Corona Guideline released, only 200 people can be involved in marriage