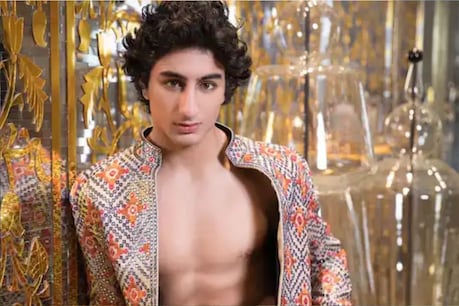 Mumbai Ibrahim Ali Khan, son of Bollywood actor Saif Ali Khan (Ibrahim Ali Khan), may be far from the film world, but not from Limelight. Discussions of Ibrahim’s foray into Bollywood continue to gain momentum every day. At the same time, there is also no shortage of people floored by their looks and fitness. Recently, designer Abu Jani and Sandeep Khosla shared a photo of Saif Ali Khan’s son Ibrahim on social media, which is becoming increasingly viral.

In this photo, designs of Ibrahim Abu Jani and Sandeep Khosla are seen in traditional jackets. In the photo, Ibrahim Patola is wearing a mirror work front open jacket. His look has been complemented with blue Pathani salwar. After looking at him, his looks have started comparing him to his father.

Many users have praised Ibrahim while commenting. At the same time, his female fans also did not miss to praise him. There is one more thing in the photo, due to which this picture of Ibrahim is in the discussion. In fact, in the photo, Ibrahim is flaunting his 8-pack Abis well. His fitness is captivating his fans.

Seeing this new picture of 20-year-old Ibrahim, his fans are elated. This photo is becoming increasingly viral on social media platforms. Many users have also expressed their desire to see Ibrahim in the film at the earliest while commenting.