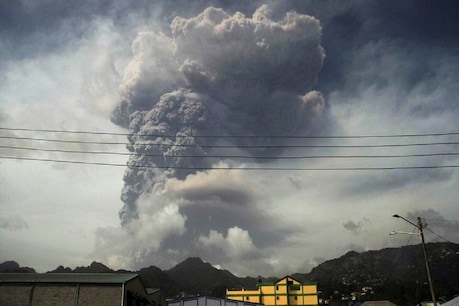 Smoke and ash on the streets after a volcanic eruption in St. Vincent on the eastern Caribbean island. (Reuters)

Caribbean Island Saint Vincent Volcano Eruption: Director of the University of the West Indies Seismic Research Center, Arusilla Joseph, said that the lava emanating from the volcano is destroying everything in its path.

Kingstown. Authorities are worried about the lives of people still present in the area as volcanic eruptions on the eastern Caribbean island (Caribbean Island Saint Vincent) in St. Vincent began last week with the release of large amounts of ash and hot gas. Experts have described it as “a huge explosion”. The lava emanating from the volcano due to the eruption is flowing towards the south and southwest.

“It (the lava emitted from the volcano) is destroying everything that comes in its path,” said Erucilla Joseph, director of the University of the West Indies Seismic Research Center. Let’s leave the area as soon as possible. “There is no immediate notice of any casualty in the incident, although government officials did not react to the Monday blast which was more powerful than Friday morning’s explosion.

Around 16,000 people live near the volcano and on Thursday, on the orders of the government, they have been evacuated and sent to a safe place, but still many people are refusing to move from there. Richard Robertson, associated with the Seismic Research Center, told local radio station NBC Radio that the old and new estuary of the volcano has been destroyed and a new crater has been created.

A government minister visiting the area on Sunday said that around 24 to 36 people are still living in Sandy Bay, after which Prime Minister Ralph Gonzalvis appealed to the people to leave the area. Gonzalvis said that government officials held a meeting on Monday afternoon and discussed the problem faced by the food supply. He said it would take at least three to four months to get life back on track in St. Vincent. Deputy Prime Minister Montgomery Daniel told the radio station that the damage was more in the north eastern region of the island. The forest and fields have been destroyed. The epidemic has also caused trouble in these efforts. Since the volcano eruption on Friday, about 14 new cases of infection have come and those coming to the relief camps are being investigated. More than 3,700 government relief camps have taken shelter. There are 19 active volcanoes in the eastern Caribbean of which 17 volcanoes are present on 11 islands and the remaining two volcanoes are present inside the sea near Grenada.

(Disclaimer: This news has been published directly from the Syndicate feed. It has not been edited by the News18Hindi team.)