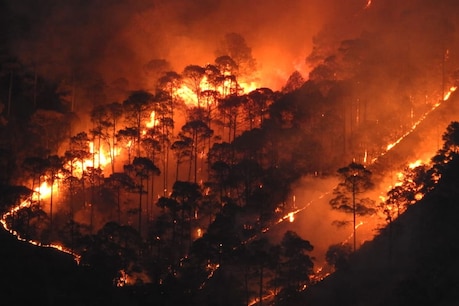 It has been more than two weeks, but the forest fire has not been controlled yet. (File photo)

The fire in the forests of Uttarakhand is at its peak. PCCF Rajiv Bhartari has admitted that the forest department does not have enough staff to extinguish the fire of uncontrolled forests.

Dehradun. The fire in the forests of Uttarakhand is at its peak. PCCF Rajiv Bhartari has admitted that the forest department does not have enough staff to extinguish the fire of uncontrolled forests. It has become impossible to stop the incidents of anthropogenic fire. Nevertheless, the forest department with limited staff and NDRF is trying to control the fire. However, to save Vanagni from becoming uncontrollable next year, proposals have also been sought from the forest divisions. This year, Rs 1.19 crore has been received for new equipment and proposals are being sought for their purchase.

PCCF Rajiv Bharatri BJ reached the forest rest house at Bhawali on Tuesday. In the press conference here, he along with the forest staff appreciated the efforts of NDRF to control Vanagni. This time, on the fire of uncontrolled forests in the entire Uttarakhand, PCCF said that, the fire is not natural, but man-made. It cannot be controlled without the awareness of the people. 1.6 crore rupees have been given to purchase equipment for protection from forest fire, where orders have also been given to take vehicles on rent wherever DFO does not have vehicles.

Many posts vacant
Bharati said that in the 130 posts of Forest Guard in Almora, 102 posts are vacant. Only 27 guards are extinguishing the forest fire. The same situation is with other divisions, so the fire cannot be controlled without the employees. Shortage of staff will be overcome soon. Bharatri told that this is the first fire season, where the blower is being used to reduce the spread of leaves and fire. The state has given five crores from the Disaster Relief Fund to all DMs.80 posts of 2343 Ranger of Forest Guard vacant

There is a huge shortage of employees and officials in the state’s forest department. Although the recruitment process is going on in some cadres, if there is no dispute in the officer cadre, then in three to four years, they will be able to fill the post. However, 1,218 posts of forest guard can be filled in two months. Because its written test has also been done. Physical examination has to be done. After joining training, there is a provision to do job as well. There are 3639 posts of forest guards across the state. Only 1,296 of them are filled. Recruitment is going on at 1218. 105 posts in 154 of direct recruitment of Ranger and 31 of 154 of promotions are vacant. That means a total of 80 posts are vacant.