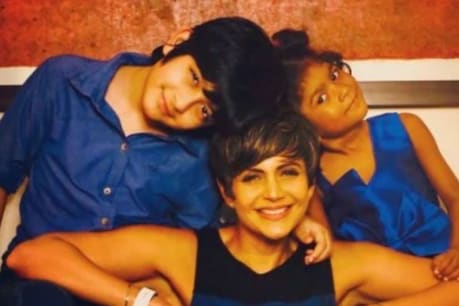 Mandira Bedi shared a story on her Instagram account, in which she appeared to be having fun with her son Veer and daughter Tara. When some people started taunting their little 4-year-old daughter after seeing the picture, the actress gave a befitting reply to such people.

Mumbai. Actress Mandira Bedi is very active on social media. These days he is spending quality time with his family. She often shares her family photos with fitness videos and photos. Recently, he had to fall prey to trolls because of his daughter. After reading dirty comments of trolls, Mandira became enraged with anger and gave a good read to the people making rhetoric on her son Tara.

A user commented on the picture and wrote, ‘From which slum the daughter has been adopted’. Apart from this, another users wrote, ‘You greedy drug addicts are scaring this slum girl forever’. After reading such reactions of the people, Mandira could not stay. He wrote a lesson to such people and wrote – ‘Special attention needs to be given to such people, you have got my attention’. Apart from this, while replying to another user, he wrote, ‘Model Citizen is also not far behind. He calls himself Rajesh Tripathi, but I do not think it will be his real name, because such sick people are the biggest cowards who hide behind the shield of oblivion and wield their tongues’.

Let us tell you that actress and TV presenter Mandira Bedi and her husband are Raj Kaushal both adopted a four-year-old girl on July 28, 2020. The girl’s name is Tara Bedi Kaushal. Ever since Tara’s involvement in the family, Mandira puts her pictures and videos on Instagram. Introducing Tara, Mandira posted a photo in October 2020, writing that she came to our world as a blessing. Our Tara. Something older than four years, whose eyes glow like stars. Veer’s sister. We welcome him to this house by spreading lots of love and arms. We are thankful and blessed. Tara Bedi skills. Became part of our family on 28 July 2020.