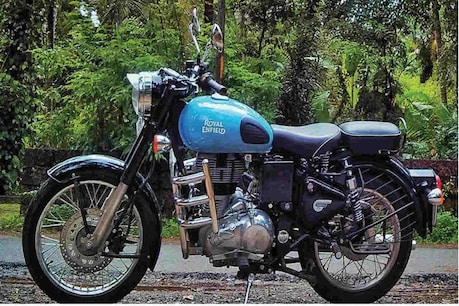 The updated version of the Classic 350 will be launched soon.

The leaked picture of Royal Enfield’s Classic Classic 350 update shows that, there has been no change in its front suspension. While the new design chrome housing has been given with its circular headlamps.

New Delhi. The standard variant of the entry-level model of Royal Enfield’s Classic 350 bike is already present in the market, the company is now testing it on the next generation model. Recently, this next generation model was spotted during testing. After its second testing, this bike can be launched soon. Videos uploaded by YouTube channel Gossholt Vlog and some spy photos have revealed that the company has given some special features to this next generation bike which makes it different from the current model. Let’s know everything about this bike.

How much will the new Classic 350 change? – The leaked picture shows that, there is no change in its front suspension. While the new design chrome housing has been given with its circular headlamps. This next generation bike is being designed on a twin downtube frame instead of a single downtube frame. Apart from this, the frame of the new design has been given in the side profile of the bike to further improve the bike. It is being developed on the J1D platform with state-of-the-art technology to enhance bike handling and performance. The company has offered both tube tires and tubeless tires in this bike. The bike has a 19-inch spoke wheel at the front and an 18-inch spoke wheel at the rear.

Also read: Today is the last day to install HSRP, challan of Rs 5,500 will be deducted from tomorrow, apply this way

New Classic 350 Engine – Talking about the engine of this bike, the company will get a single cylinder engine of 349 cc capacity, which generates torque of 27 Nm and power of 20.2 bhp. This engine comes with a 5-speed gearbox. Along with this, SOHC technology is being used to reduce the vibration in this bike.Also read: This bike of TVS brought home at an EMI of only Rs 1,999 in Navratri, see full scheme here

New Classic 350 Price – Among the features of the Next Generation Classic 350, the company has given a new instrument console with a tripper navigation system. Which will give information like speed, gear system and fuel gauge reading. The price of this bike will be more than the current Bullet 350 model.