There is talk of ending Kumbh immediately after the Corona infection. (File photo)

In view of the increasing transition of Corona, the announcement of Mahant Ravindra Puri, Secretary of Niranjani Akhara, also appeals to other Akharas to end the Kumbh.

Haridwar. In view of the increasing infection of Corona and the infected saints and devotees who are getting every day in Haridwar Kumbh, the discussion about the early end of the event has gained momentum. Amidst this discussion, Niranjani Akhara announced the end of Kumbh on Thursday. Announcing the end of Kumbh, Akhara Secretary Mahant Ravindra Puri said that due to the rising outbreak of Corona, the Akhada has decided that the Kumbh Mela will be abolished on 17 April. During this time, Puri also appealed other quarters to end the fair and said that in view of the Corona infection, the fair should be concluded in the interest of the people.

Earlier, Kapil Dev, the saint of the Nirvani Arena, died on Thursday. Kapil Dev was corona positive and admitted in Kailash Hospital in Dehradun. Earlier on Thursday, there were reports of 100 pilgrims joining the Haridwar Mahakumbh and 20 saints being corona positive, which shocked the administration. During the last one week, lakhs of devotees have reached Haridwar for the Kumbh Snan. During the last two big events like Shahi Snan, 31 lakh and 14 lakh people took a dip in the Ganges respectively. During this time, there has been an increase in the cases of corona infection in Haridwar. 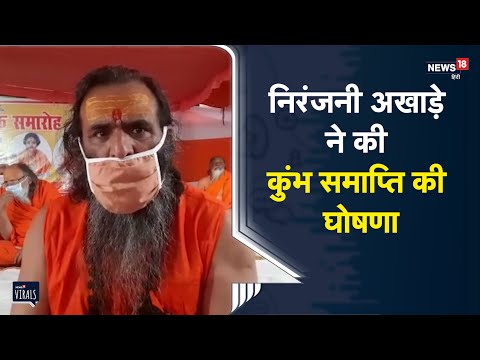 In the last two days, more than 1000 cases of corona infection have been reported in Haridwar. Meanwhile, the death of Sant Kapil Dev of the Nirvani Arena from Corona has raised concerns about the situation. At the same time, 1700 people present in Haridwar Kumbh have been found corona positive in the last five days. In view of this, there has been a stir in the administration as well. Efforts are on to trace the people who have come in contact with these people, but due to the large number of people, the work is very difficult. This news has just come and you are reading it first on News18Hindi. As information is being received, we are updating it. For better experience, keep refreshing this news so that you can get all the updates immediately. Stay with us and get every correct news, first of all only on Hindi.News18.com…