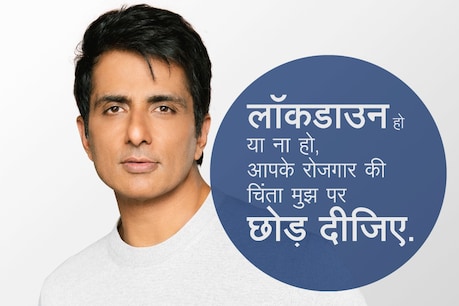 Sonu Sood has clearly stated this time that whether or not there is a lockdown this time, leave the worry of your employment to me…

New Delhi. Coronavirus once again has started spreading across the country with great speed. Because of this, once again the situation with lockdown is becoming in many places. Let me tell you, in March last year, when the lockdown was imposed across the country to protect against Corona, the migrant laborers, who suffered the most, were Bollywood actors whose pain Sonu Sood It was not seen from them and they had helped the migrant laborers openly. These were the same migrant laborers who, after the lockdown, had walked for miles on foot and bicycle from one state to another.

In such a situation, Sonu Sood came forward to help them. Now once again, Sonu Sood has come in front of people for help. Sonu Sood has clearly stated this time that whether or not there is a lockdown this time, leave the worry of your employment to me… He said in a tweet from his Twitter account that he will definitely try it. Actually, Sonu Sood has created an app for employment, which is named ‘Good Worker’. Sonu has asked those people who need employment to download this app.

Also, Sonu has also shared a number, on which he is also advising to make missed calls to the needy. On the other hand, due to the Corona (Covid 19) epidemic in the country, the situation is becoming uncontrollable. There is a lack of basic facilities in hospitals. There is a huge shortage of oxygen cylinders in hospitals. In such a situation, Sonu Sood has once again emerged as the messiah of the people. #SonuSood is trending the most on this Twitter. Actually, ever since Corona has wreaked havoc in the country, Sonu Sood has been engaged in helping people. People do not hesitate to ask for help from the actor through social media (Sonu Sood Twitter) and the actor also does not disappoint any needy. Now they have come forward to help the people of Indore (Sonu Sood Indore), where the situation is very bad due to Corona. According to media reports, they have transported 10 oxygen cylinders to a hospital in Indore.