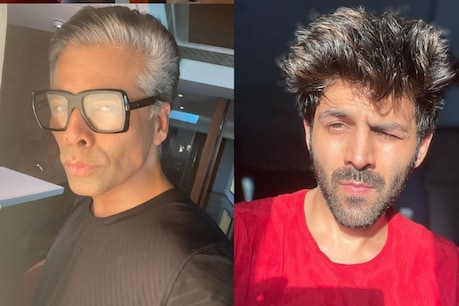 After removing Kartik Aaryan from the film ‘Dostana 2’, Karan Johar has also unfollowed Karthik from Instagram.

Mumbai: Bollywood producer-director Karan Johar’s film ‘Dostana 2’ is not in the discussion about his story but about his hero. According to the reports, actor Karthik Aryan has been shown the way out from ‘Dostana 2’ and any other actor is going to replace him. After his removal from the film, it is now reported that Karan has distanced himself from Karthik on social media.

According to media reports, actor Karthik Aryan had shot 20 days of ‘Dostana 2’ but he had problems with the script of the second part of the film. Because of this, Karan Johar replaced Karthik from the film. The resentment between the two has increased so much that now Karan has removed Karthik from his list of social media followers. This clearly shows the rift between the two celebs. However, Karthik is still following Karan Johar on Instagram.

Let us know that when the news of Karthik Aryan’s departure from ‘Dostana 2’ was revealed on Friday, it started trending on Twitter. The actor’s fans have come out in support of him openly. Many users of social media have started to boycott ‘Dostana 2’ and Karan Johar. At the same time, Bollywood Panga Girl Kangana Ranaut has also opened a front against Karan. The actress tweeted and targeted the nepotism gang. Kangana Ranaut, who came in favor of Karthik, even went on to say that ‘leave Karthik alone, do not follow him like Sushant and do not force him to hang him’.

Now the names of Vicky Kaushal and Rajkumar Rao (Rajkummar Rao) are coming out for Karan Johar’s ‘Dostana 2’. However, there is an uproar over this film right now.