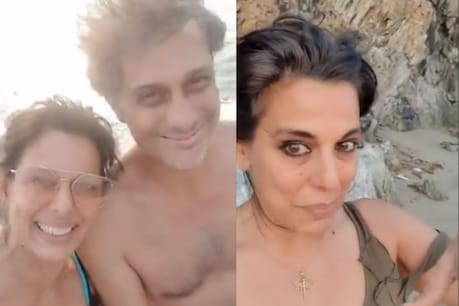 Many celebs have been infected due to continuous increase in corona cases in Mumbai (Mumbai), while on the other hand some celebs are going to Goa for holiday. Recently, actress Pooja Bedi also reached the beach in Goa to enjoy the holidays and said something, due to which trolls started hurting.

Mumbai. Bollywood actress Pooja Bedi was seen having fun with her fiancé in Goa. While sharing the video on social media, telling the fans about their enjoyment, they have asked the fans not to live in fear. Pooja posted a video from Goa. In the video, she was seen enjoying boating in the sea. During this time, he did not apply a mask, nor did his fiancée. Along with posting this video, it was written that ‘it has been a year since I was locked in a cage and wearing a mask for fear of the virus, it is clear that it is not going to go away. After wearing mask / lockdown for almost a year, if you die tomorrow… what will be your biggest regret? Pooja started trolling after this tweet.

In fact, a user tweeted to DGP Goa and other officials that ‘the stars are asking people to break the Kovid rules on Goa Beach. Wearing masks is violating the rules. The video is proof, please impose a penalty on them under the rules’. Replying to this, Pooja wrote that there is no lockdown in Goa. He wrote that ‘1. There is no lockdown in Goa. 2. It is natural that one will not apply masks while eating, drinking or taking photos / videos. 3. Leaders across the country are posing in programs without a mask. Will they also be arrested? ‘ Apart from this, Pooja has also confirmed her talk by sharing a symbolic photo. Apart from this, many users said that this phase of the epidemic being a public figure, do not give such advice. At the same time, someone wrote that such people should not be allowed to enter Goa.

Joys of living in healthy, happy #goa .Free your mind #NoFearLife is meant to be lived…❤ not spent caged and masked for a year/ years in fear of a virus that’s clearly not going away!If you died tomorrow after year of masking/lockdown.. what would ur greatest regret be? pic.twitter.com/ydXG5OGsou

Let us tell you that on April 14, Pooja had posted a video and said that she is enjoying in Goa After this, Pooja cameras her fiancé and says ‘My Baby’.