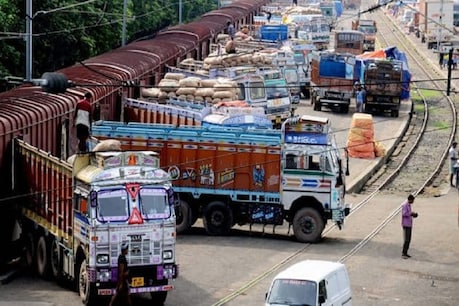 The e-way bill is mandatory from April 2018 under the Goods and Services Tax (GST).

In a report of the government on the e-way bill, it was revealed that 180 crore e-way bills have been created in a period of three years till March 2021. Out of which only 7 crores were able to verify the cats.

New Delhi. The central government (Govt of India) is working on a system in which real time data will be made available to GST officers (GST officers), where Vehicles will roam without E-Way Bills. With this system, GST officers will be able to check such trucks at the toll plaza and do the checking. Not only this, such an analysis report will be made available to the tax authorities in which the officers can see that the cases where there is an e-way bill but there is no movement of vehicles, so that the circular trading (fraudulent showing of fake sales money for the use of input tax credit). We will be able to come to the notice of the matter, as well as the information about the recycling bill of the e-way bill to identify the tax levy.

Under the Goods and Services Tax (GST), the inter-state transport e-way bill for goods worth more than Rs 50,000 has been made mandatory since April 2018. However, it does not include carrying the geld. The government is now also working on real-time and analysis reports on RFID (Radio Frequency Identification) for GST officers. With which the e-way bill will be used to bring misuse of the system, screws can be put on it.

In a report of the government on the e-way bill, it was revealed that 180 crore e-way bills have been created in a period of three years till March 2021. Out of which only 7 crores were able to verify the cats. In the financial year 2020-21, only 2.27 crores were verified against the e-way bill of 6 1.68 crores. At the same time, if we talk about the financial year 2019-20, 62.88 crores of e-way bills were generated, out of which the tax authorities selected 3.01 crores for verification.

The most generated e-way bill in these five states

According to the report, the five states in which the highest e-way bills were generated include Maharashtra, Gujarat, Karnataka, Haryana and Tamil Nadu. On the other hand, in the five regions in which the maximum number of e-way bills were generated in the last three years in the textiles, machinery and mechanical equipment, electric machinery, laeha, steel and vehicles sectors.