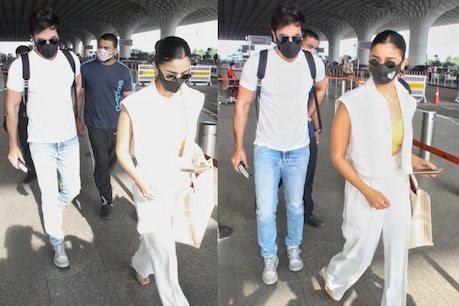 After Ranbir Kapoor and then Alia Bhatt beat Corona, they both planned to spend quality time and left for the Maldives.

Mumbai. Amidst Corona Lockdown in Maharashtra, many stars have gone out of town for holidays. Recently, Deepika Padukone, Ranveer Singh, Sara Ali Khan, Tiger Shroff and Disha Patani were spotted at the airport leaving Mumbai. . Now after defeating Corona, Bollywood’s love birds Alia Bhatt and Ranbir Kapoor have also come into vacation mood. Both have left for Maldives, they were spotted at the airport today.

After first defeating Ranbir Kapoor and then Alia Bhatt’s Corona, they both planned to spend quality time and left for the Maldives.

A few photos of Alia and Ranbir have surfaced, in which both of them are seen landing at the airport with the same car. During this, Alia is wearing a white jacket and pants, while Ranbir is also seen in white t-shirt and denim jeans. Both have black colored masks on their faces. Actually, after a long time, both have got the opportunity to spend time together as Ranbir was in the quarantine for 14 days before Kovid was in the grip of 19, as soon as he got well. Alia’s report also came to Corona positive. Recently, Alia’s report has also turned negative.

Let us tell you that there is a 15-day curfew in Maharashtra these days. In such a situation, the government has also banned the shooting of films and TV serials. Across Maharashtra, cases of corona are increasing very fast. The industry’s Alam is that in the last two months, many famous celebs, including Akshay Kumar, Aamir Khan, Ranbir Kapoor, Alia Bhatt, R Madhavan, Tara Sutaria, Karthik Aryan, have come into its grip.