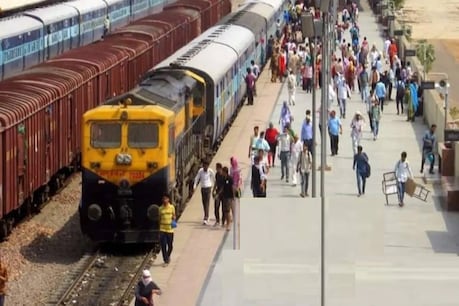 Railway has canceled many trains

Indian Railways has canceled many trains on 19 April and 20 April. If you also have a reservation, then check this list immediately before that.

New Delhi: If you have made a travel plan today or by train, then this news is very important for you. Indian Railways has canceled many trains on 19 April and 20 April. If you also have a reservation, then check this list immediately before that. In the second wave of Corona spreading rapidly across the country, the Railways has canceled some trains till further orders. Western Railway has given information about this by tweeting.

Western Railway has written in a tweet that some special trains coming and ending at Western Railway stations have been canceled from today till further orders. This includes many trains going to Surat, Jamnagar, Bhopal, Vadodara, Veraval and Dahod.

WR has decided to run 2 trips each of Summer Special trains between BDTS-Gorakhpur, Mumbai Central-Manduadih-Dadar, BDTS-Bhagat Ki Kothi & Ahmedabad-Danapur.Booking of these trains will open on 20th and 21st April, 2021 at nominated PRS counters & on IRCTC website. pic.twitter.com/bGyGe3XH3i

Many trains will run on this routeApart from this, Railways have also announced to run some special summer trains. These trains will run between BDTS – Gorakhpur, Mumbai Central – Manduadih – Dadar, BDTS – Bhagat’s Kothi and Ahmedabad – Danapur. You can book on these trains on 20 and 21 April 2021. You can buy train tickets from the PRS counter and the IRCTC website.