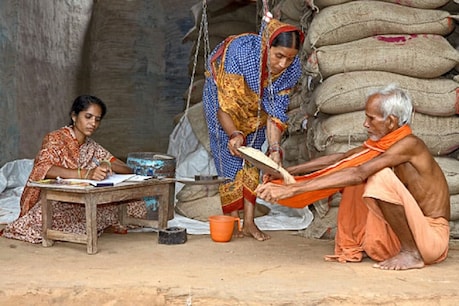 The central government has announced to give 5 kg of free grain per person in May and June 2021 under the Pradhan Mantri Garib Kalyan Anna Yojana.

New Delhi. Amidst the corona epidemic, the central government has decided to provide food grains to the poor for free for the next two months. In fact, the central government said on Saturday that from May 1, 80 crore PDS (PDS) beneficiaries are engaged in preparing monthly distribution of free five kg extra grains. The aim of the government is to help the poor in the second wave of the epidemic to overcome economic difficulties. Additional food grains will be given for two months under the Pradhan Mantri Garib Kalyan Anna Yojana (Pradhan Mantri Garib Kalyan Anna Yojana) scheme through ration shops or public distribution system.

PMGKAY is being re-implemented at the request of some state governments as last year saw good impact of the scheme. Last year, a sudden lockdown was imposed to stop the spread of Kovid-19.

Food Secretary Sudhanshu Pandey said, “FCI has prepared the entire machinery of more than 2,000 depots to keep the stock ready for distribution to the states. The FCI is in constant contact with the states. We will ensure supply from FCI to the state government and thereafter at fair price shops or ration shops. ”More than 26000 crore rupees will be spent on Pradhan Mantri Garib Kalyan Anna Yojana

He said that 80 lakh tonnes of food grains will be distributed in the next two months, which will put a financial burden of more than Rs 26,000 crore on the exchequer. Pandey said that this time pulses have not been included under PMGKAY. Last year it was kept in an exception and pulses with cereals were given free of cost. The National Food Security Act (NFSA) scheme is only about food grains. ”

Also read- Indian Railways gave great relief! 3816 Kovid Care coaches have been prepared, know where you are getting this facility

Asked why the government is restricting the distribution of free food grains for only two months and whether this is a sign of a lockdown in the coming months, the secretary said, “The Prime Minister clarified It has been said that there will not be a complete lockdown. ”