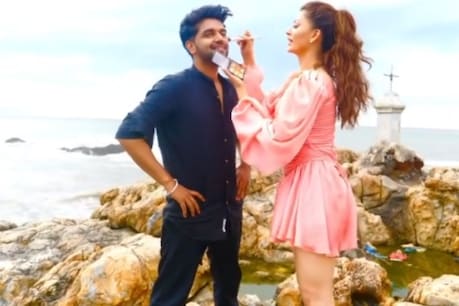 A video of Urvashi Rautela is becoming increasingly viral on social media. In this video, the actress is seen doing makeup of Guru Randhawa.

Mumbai. Bollywood actress Urvashi Rautela And Guru Randhawa will soon be seen in a new music video. Urvashi is continuously sharing beautiful photos on social media from the shooting set. After many photos of her and Guru, now the actress has shared a funny video. In this, Urvashi is seen playing the role of a makeup artist. This video is becoming very viral on social media.

Urvashi Rautela has shared a funny video on her Instagram. In this video, she is doing makeup of Guru Randhawa. With this video, Urvashi wrote the post ‘Pesh hai drown makeup, beauty master class with world class beauty, beautiful boy Gurundhawa, and he will definitely like, Guys how much I should charge for this’. In this video, it is seen that Urvashi is posing for the camera to make-up and the guru disappears even before he turns. Everyone laughs at this funny act of his. Final Guru is seen getting makeup done. This funny video has got about 1 million views so far. On this video, fans are fiercely commenting and liking.

Please tell that Urvashi Rautela and Guru Randhawa’s new song ‘Dubbed Gaye’ is going to be released on April 30. Earlier, his video song ‘Woh Chand Kahan Se Laaogi’ was released. In this song, she was seen with TV star Mohsin Khan. Talking about the work front, Urvashi Rautela is also shooting for Mohan Bhardwaj’s ‘Black Rose’ these days. This film is being made on the play ‘The Merchant of Venice’ by famous litterateur Shakespeare. Earlier, his film ‘Virgin Bhanupriya’ has been released on the OTT platform.