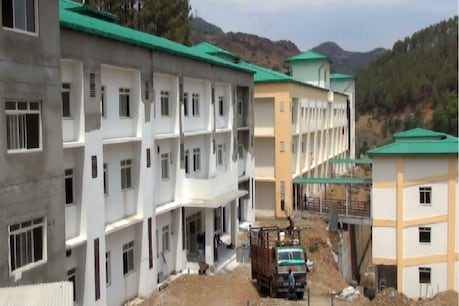 Despite this, this hospital, which is important for its health service, has still not been able to exist.

Pithoragarh. In this era of Corona virus, it is very important to strengthen the health system. But you will be surprised to know that even after 17 years, the Base Hospital has not been fully constructed in the Border District Pithoragarh. It is different that 60 crore rupees have been spent so far in erecting its structure. Football has proved to be the only base hospital for politicians in the ND Tiwari government. In 2005, when the BJP openly opposed the base hospital, including the district and women’s hospital, in 2012, it was shifted from Chandak to Puneri as soon as the Congress came to power. Despite this, this hospital, which is important for its health service, has still not been able to exist.

In the last 9 years, the hospital structure was definitely erected, but no one knows when it will start on a regular basis. Social activist Kundal Chauhan says that nothing can be more embarrassing than this that a hospital has not been started even after 17 years. The government has spent 60 crores so far to build a base hospital. Despite this, only 80 percent of it has been ready. With this, where 200 patients could get better treatment, the benefit of CT scan would have been easily available to the people of the frontier. During the period of Corona, the half-incomplete base hospital was transformed into a Kovid care center several times, but people did not get the benefit that was needed for decades.

Health system is already derailed
CMO Dr. Harish Chandra Pant says that efforts are being made to complete the work of the base hospital soon. The executive body has been instructed to expedite the work. Health system has already derailed in the mountainous districts of Uttarakhand. In such a case, the increasing infection of the corona may invite a new crisis. Despite this, our rulers do not have any access to health services. Had the governments been really worried, even after traveling for 17 years, this base hospital would not have been lying like this.