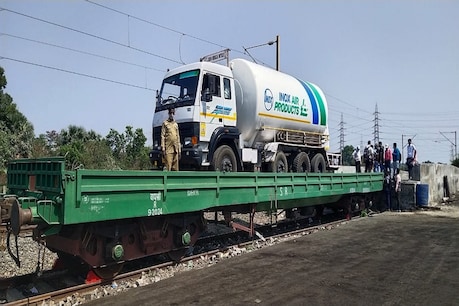 Indian Railways is running a special train to carry oxygen.

After the increase in Corona virus cases, many states are facing lack of oxygen. At the same time, Oxygen Express is being run by the Railways to meet the lack of oxygen.

New Delhi. The country is currently battling the second wave of Coronavirus. In the midst of the ongoing oxygen crisis in many parts of the country, the Railways (Railways) have now taken the front. In fact, till now the railways have supplied 150 metric tons of liquid medical oxygen (Liquid Medical Oxygen) through 10 oxygen tankers in different states.

Railway Minister Piyush Goyal tweeted, “Indian Railways has supplied a total of 150 metric tons of oxygen through 10 oxygen tankers. Apart from this, 10 oxygen tankers are running, one oxygen express carrying four tankers of total 70 metric ton will leave from Raigad for Delhi tonight.

Under the leadership of PM NarendraModi ji, Indian Railways has moved 10 oxygen tankers till now of total 150 MT and 9 more are on the move. One Oxygen Express carrying four tankers of total 70 MT will depart tonight for Delhi from Raigarh. pic.twitter.com/vXZdJI2CRC

Oxygen express service starting 21 AprilThe Oxygen Express service was started from April 21. The Indian Railways will continue to operate the Oxygen Express train for the next few days to carry liquid medical oxygen and oxygen cylinders in view of the severe shortage of oxygen amidst increasing cases of Kovid-19.